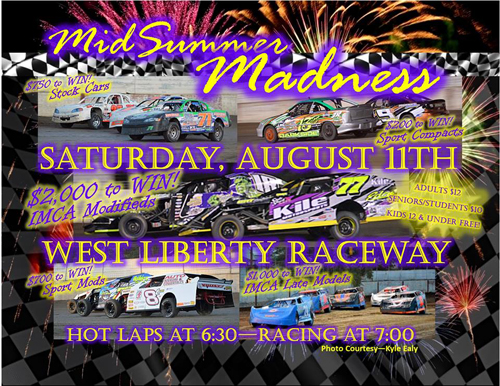 Cedar Rapids, IA – Ceasing operations on a weekly program or locking the gates on a facility is never a good thing for auto racing.
West Liberty Raceway announced in early 2018 that there would be no weekly racing program at the historic half-mile. That stunning announcement was met with at first, confusion. Then, with anger, outrage, and yes, a few tears.
But instead of a whole summer of dormancy, Bud Kile and his family, who have been involved with the racing scene at West Liberty for God knows how long, decided to knock the dust off the bleachers, throw some water on the track and have themselves a race. What madness…
The Mid-Summer Madness was originally scheduled for July 14 but due to conflictions with an event at Tipton, it was rescheduled for Saturday, August 11. The postponement worked out favorably in many ways. The original card on July 14 had Modifieds, SportMods, Stock Cars and Sport Compacts but with the date shifting forward, Late Models joined the fray. And what’s a race at West Liberty without Late Models?
Upon my arrival that Saturday evening, the line of cars trying to find a parking spot matched the line of trailers attempting to get into the pits. The line to check in at the pit barn seemed even longer. Apparently, racing at West Liberty had been missed…
As I waited in line to check in and get my pit pass, a gentleman, I presume who was associated with the Muscatine County Fairboard, stopped by with a survey. He asked if West Liberty Raceway should be changed to a different size circumference. The choices were; 1/4-mile, 3/8-mile, or keep it at its current size, half-mile. I voted to keep it the same (if it ain't broke, don't fix it, right?). I asked the gentleman what the majority had voted for. “Oh, definitely half-mile,” he responded. “Some have said the 3/8-mile and but hardly anyone wants it a quarter.”
I found it refreshing that they were asking the opinions of drivers (and one half-ass photographer) what they wanted. It certainly gave me and others the impression that the decision makers weren't going to nail the coffin shut quite yet. I felt that this was a step in the right direction in keeping racing active, whatever capacity that was, at West Liberty.
As I entered the pit area, I ran into Mike Ruefer, as many of you know, an ARI contributor. As we shook hands, I asked him what brought him out that evening. “I came out to support Bud (Kile) but I also wanted to be here in case this is the last race. I would never forgive myself if this was it and I didn’t show up.” I think Mike summed up what a lot of people were thinking. 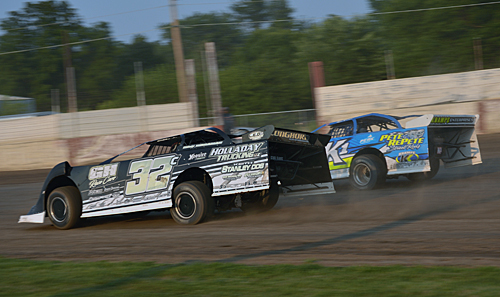 Chad Holladay #32C and Kyle Krampe #K1 race down the backstretch at West Liberty Raceway. - Kyle Ealy Photo
Before the racing commenced, we stood underneath the old trees that stand in turn #2 and looked everything over. The pit area and infield were packed full of cars. The stands were filling in quickly - it appeared that it was going to be a sell-out.
Mike brought up (and I agreed) that while West Liberty may never be a successful weekly enterprise again, why not make it a specials only-type track, with three or four different racing events throughout the summer?
Mike also added, “Wait until everyone else has their schedules posted and then pick and choose a few dates that doesn’t conflict with anybody else. They could have a Modified special one month and maybe a Sprint Car spectacular the next month and then throw in an Open Late Model show another month. Why not bring back the Liberty 100 in the Fall? The possibilities were endless...
The more Mike talked, I kept shaking my head (in a up/down motion as opposed to a side-to-side motion) in agreement. Looking at the mass of cars and people scattered all over creation, you could envision that Field of Dream philosophy – If you build it, they will come.
After the races, you heard a few bitching and moaning; the concession lines were too long, and they ran out of food early; the caution lights had a glitch; the program didn’t run as smooth as it should of.
But the majority who were there couldn’t have cared less. The important thing was; they were there and a part of what was happening. What made this night so special was the spirit of unity.
Many, many thanks to the Kile family for bring racing (and unity) back to West Liberty Raceway. Let's do it again at least a couple of times in 2019. 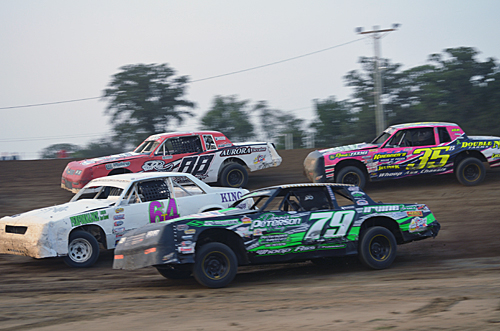 In my line of work, Saturdays are money making days, so having one off is a rarity. That also means that going to Independence for racing is few and far between. I had tried twice this summer (once in June and once in July) and had been rained out both times. This would probably be my last attempt to get a night in.
The third time would be the charm as ideal weather greeted me and others this night. As always, it was nice to walk in the pit area at Independence and be greeted by old friends. I chatted with quite a few people I hadn’t seen since last season. They, of course, had wondered about my whereabouts and I had to explain to them that, “It ain’t easy bein’ cheesy”.
The long wait would pay off handsomely as 90+ cars filled the pit area and the track conditions were near-perfect throughout the evening. Standing over in my normal spot in turn #3, I took literally hundreds of two and three-wide shots, so many I lost count.
The Stock Cars and Hobby Stocks, whether it be sanctioned by IMCA, USRA, or any of those other outlaw outfits, are still and will always be, the underappreciated divisions of grass roots racing.
Late Models, Modifieds, and sadly too, SportMods, get all the headlines at weekly and special events, but it’s the fendered underbelly that consistently give competitive performances.
Saturday night was proof in the pudding…
You could have thrown a blanket over both the Stock Cars and Hobbies during their respective heat races and the feature events were more of the same.
Jarod Weepie’s win in the IMCA Stock Car main event was as hard-fought as they come. Starting on the third row, Weepie had to fight and claw his way past Paul Shepard, Tony Schimmels, points leader Norman Chesmore and finally race-long leader Justin Temeyer. Even after he secured the top spot, Weepie had to fend off numerous advances from both Temeyer and Chesmore before taking the checkered.
The Hobby Stock feature would be one for the ages. It was truly one of the best races and most emotional finishes I had witnessed in a long time.
Seventeen-year-old Kaden Reynolds of Cedar Rapids, IA, in only his second time behind the wheel of a Hobby Stock, started 17th, made his way to fifth with only a few laps left, and somehow, miraculously, slithered his way past four cars on the final restart to score the victory.
The photo below only tells half the story. As confident as he looks in the photo with his arms raised and the #1 sign, when it came time for his victory lane interview with Ryan Clark, more tears than words came from the young man…He was simply speechless. 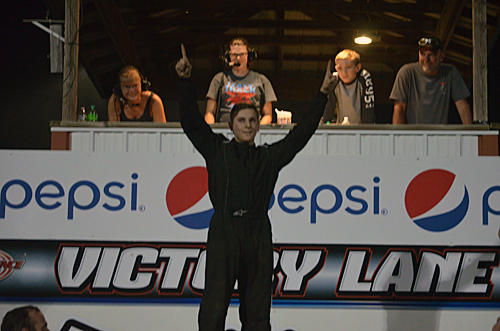 Kaden Reynolds celebrates his first IMCA Hobby Stock win. - Photo by Kyle Ealy
The only words he could muster was, “All I was hoping for was a top-10 finish.”
As Ryan said to me afterwards, “Those are the best interviews; when they’re so full of emotion they can’t spit out the words, but they don’t need to; the look on their face tells the story.”
That, folks, is what makes racing so special and I can only feel privileged to be apart of rare moments like that; it’s what keep me coming back.
A special thanks goes out to the Independence Motor Speedway crew and officials who make that track something truly special. It was good to be home.
Thanks for reading,
Kyle