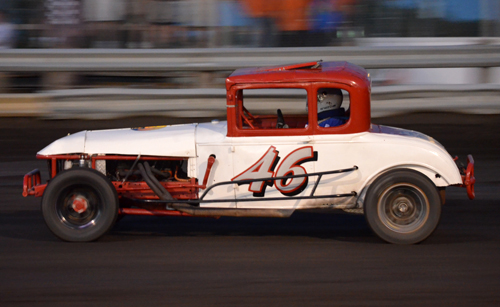 Cedar Rapids, Iowa – My racing endeavors took me near and far this past weekend as I ventured three hours in a northwesterly direction to Algona, Iowa for the Kossuth County Racing Hall of Fame ceremony on Saturday and then made the short trip to my home away from home, Independence Motor Speedway for the World of Outlaw Late Models on Monday evening.
Chad Meyer (http://www.dirttrackradio.com/), Rick Klein and everybody involved with the Kossuth County Fairboard have done an excellent job over the past few years with the Hall of Fame, held annually during the Kossuth County Fair, and this year’s event was no exception.
Six well-deserving honorees were inducted Saturday night, including; Roger Hendrickson (car builder), Roy Jo Peltz (driver), Bobby Geldner (driver), Don Hurn and Wayne Arndorfer (car owners), Elmer Cook (promoter/track official) and Bob Shryock (driver).
When the class of 2012 was announced, two names stuck out right away; Bobby Geldner and Bob Shryock.
Geldner, who passed away in 2010, was one of the original drivers to compete with Ted Johnson’s World of Outlaw Sprint Car Series when they opened shop in 1978. Before that, he made a name competing in the Midwest Sprint Association, racing against the likes of Barry Kettering, Lyn McIntosh, Leonard McCarl, Bill Hopp, and Bill Dollansky, amongst others.

Before getting behind the wheel of a sprint car, Geldner competed in modifieds, racing weekly at Algona, Fairmont, Minn., and Jackson, Minn., against Kossuth Hall of Famers Jim Edgington, Gene Schattschneider, Les Wilden, and Dick Forbrook. Brett Geldner, who has also wheeled a few sprint cars in his days, was on hand to accept for his late father and seemed very humbled upon accepting the award.
If you followed racing in Northwest Iowa in the 70’s and early 80’s, Bob Shryock was a household name, dominating the late model scene in Iowa, Minnesota and the Dakotas for many years until a job-related accident took his life in the mid-80’s.
In addition to winning track championships at Alta, Algona, Webster City and Fairmont, Minn., and Jackson, Minn., Shryock won numerous late model specials over the years, including the Midwest Super Stock Championships at Algona, Race Days in Alta, and the All-Star 10,000 in Fairmont, Minn., the Black Hills Speedway Grand Nationals three consecutive years (1974 –1976), and he was champion of the now-defunct American Outlaw Stock Car Series in 1983. In 1977, one of his greatest years individually, he won track championships at Alta, Fairmont and Webster City, including a record seven feature wins in a row at Fairmont. The Bob Shryock Memorial race has been held for many years in honor of the popular driver who left us too soon but made a positive impact on the sport of racing that will be remembered forever.
With the Kossuth County Fair race special, you can assure yourself of three things; a packed house, lots and lots of cars and six-foot trophies to the feature winners. This is how a county fair race should be…
Much like the Howard County Fair that I attended in June, the atmosphere for the evening’s program in Algona was electric; and that’s how it should be. The grandstand was packed from rail to rail, the pit area had so many race cars, they had to move the overflow to the infield. The added purse donated by some area businesses added to the spectacle and drivers showed up in great quantity to grab their share of the prize money. I estimated between 150 and 160 cars in attendance this evening and each division was well-balanced in quantity and quality.
Champions were abundant in each division with the IMCA modified class led by former Super Nationals winner Kevin Stoa, Mark Noble, and Richie Gustin. The IMCA stock car field was headed by former national champion David Smith and Super Nationals winner Kevin Opheim. The IMCA hobby stocks were led by another multi-time Super Nationals champion in Andy Boeckman.
Once again, the Kossuth County Fairboard and the Hall of Fame committee put their best foot forward on the biggest night of the year. I can hardly wait until next year’s group is honored… 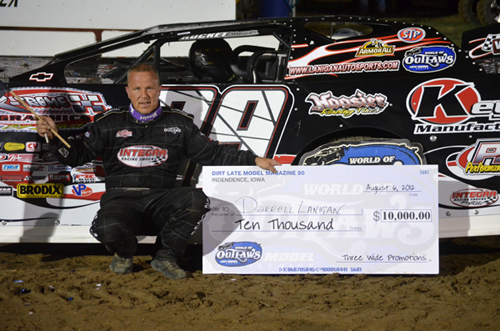 
Monday night I traveled to Independence Motor Speedway for the triumphant return of the World of Outlaws Late Model Series. Last year’s event was highly anticipated but very disappointing overall. This year’s version was a night and day difference…
Darrell Lanigan and Clint “Cat Daddy” Smith gave the near sell-out crowd their money’s worth as the two veterans duked it out for much of the 50-lap feature. Lanigan started on the pole and appeared to be in the driver’s seat but Smith methodically made his way from his seventh starting position and closed the gap on the leader. Lanigan, who has been unstoppable on the WoO tour as of late, had to use every trick in the book to hold off Smith, who clearly had the best set-up of anyone on the track all night long.
Smith kept pestering Lanigan the last 15 laps of the race and actually had his nose out front on lap 42, but Lanigan shook off Smith’s advances to take the checkers and the $10,000 winner’s share of the purse. It was Lanigan’s fifth consecutive World of Outlaws victory.
It was as good of a race as you’ll ever see between two of the best drivers in the business.
I have to salute Darin Burco and Todd Summers for a couple of smart decisions made on the evening’s program. First, they didn’t inundate the program with three or four support classes, instead choosing to run one class, the IMCA Modifieds, and giving them a rather attractive purse in which to compete for ($1,000 to win). Secondly, they ran the World of Outlaws’ feature first, giving the marquee event first billing, instead of making the late model fans wait around to the very end.
At most tracks, the headliner always run last, you have to wait (impatiently) for the support classes to go through their paces (complete with multiple cautions); all so the promoter can pad the beer sales. Usually, the racing surface has taken a good pounding by the support classes, so when the main attraction finally does get their turn, it’s a one-lane, lockdown racing. Not exactly what you paid for…
On a week night when most people want/need to get home at a reasonable time, this was a great call by upper management. For those people who shelled out $30 to see “just” late models, they got their fill of the stars and cars, witnessed a stellar feature and went home happy. For those who chose to stick around afterwards and watch the Modifieds do their thing, they too, went home with that warm fuzzy feeling that only Jack Daniels or a marijuana cigarette can give you.
It was a win-win for everyone….nicely done.
Thanks to Rick Hartzell for bringing the World of Outlaws back to Independence and especially to Darin Burco and Todd Summers for running a first-rate program. Let’s do it again next year…
Thanks for picking us up,