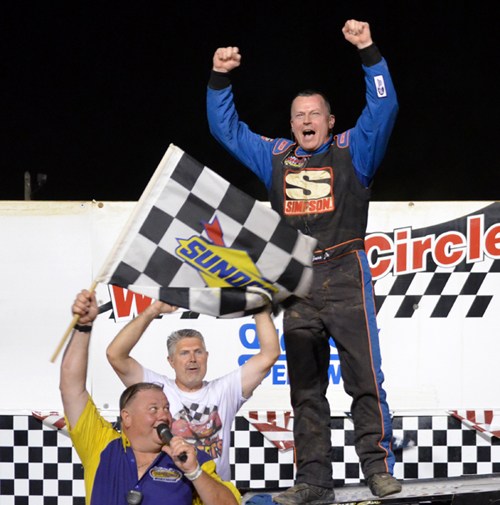 – When Ray Guss Jr. smells blood, he goes in for the kill. Sometimes it’s quick and painless; other times its slow and agonizing. Either way, when he has you in his clutches, you’re going to suffer defeat.
On Wednesday night, the Milan, Ill., speedster gave the the Rock Island County Fair crowd their money’s worth, coming from the middle of the pack to win a thrilling 58-lap Hershel Roberts Memorial, passing leader and pole-sitter Todd Mahlstrom with two laps to go.
Justin Kay took the top spot from his third starting position and looked to be in command, leading the first 29 circuits of the main event. Todd Mahlstrom, who earned the pole position but dropped back at the start, built up a head of steam and overtook Kay at the midway point of the feature and he appeared to have everything going his way, using the high side of the high-banked quarter-mile to perfection. 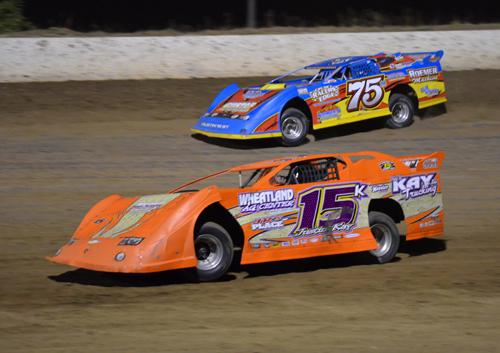 Meanwhile, Guss methodically worked his way to the front of the pack, passing a throng of late model standouts including Mike Cothron, Mike Murphy Jr., series’ point leader Jeff Aikey, Nate Buesling and Andy Eckrich. He settled into the third spot behind Kay and Mahlstrom with 10 laps left. Everyone in the house, including myself, was now waiting for the predator to dispose of his prey.
Guss took to the low groove to get by Kay and then set his sights on Mahlstrom, waiting for the right opportunity to make his move. Glued to Mahlstrom’s bumper on each and every lap, Guss displayed great patience, choosing not to show his hand too early, instead waiting for Mahlstrom to make a mistake. That miscue would come with three laps left when Mahlstrom would get a little squirrely coming out of turns three and four, allowing Guss dive low and power by him going down the front stretch.
It was all but over after that…the fat lady sang, the crowd roared its approval and Guss would take Grant Oskvig’s double checkers to take his second straight Roberts Memorial victory, which was fitting considering Roberts, a former IMCA Late Model driver, owned the car Guss drove to series and national IMCA Late Model championships in 2010 and 2011. The main event was 58 laps in honor of Roberts’ car number.

Mike Cothron, who also got past Justin Kay during Guss’ march to the front, also took advantage of Mahlstrom’s slip to finish in the runner-up position while Kay followed in third. Mahlstrom, who should be commended for driving an outstanding race despite the last minute slipup, grabbed fourth and Aikey maintained his point’s lead with a top five finish.

It was late model racing at its best…it’s why I put this date on my race schedule every year.

On the undercard of the program was a $1,000 to win Street Stock special event. This was a race of attrition, as 20 cars took the green flag but only seven were still standing at the bitter end. There was plenty of excitement in the feature event and plenty of cautions to boot. Two, even three-wide racing was prevalent throughout the contest, with plenty of paint swapped and sheet metal torn. 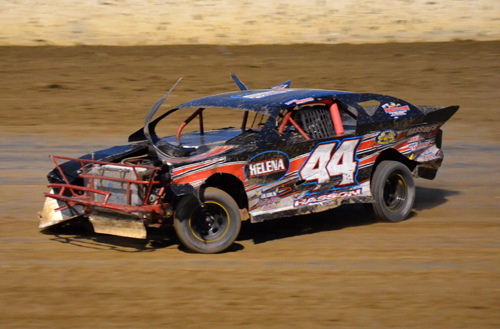 There was some bumps and bruises in the Street Stock main event as this driver will attest to. - Kyle Ealy Photo


This race saw numerous lead changes but unfortunately, it never had the opportunity to build proper rhythm with the multiple yellow flags being waved. Chris Lawrence and Emily Gade did put on a show for the fans at the end, going nose to tail, door handle to door handle for the top spot before finally secured the point and grabbed the hard-fought win.

The downside of this event, if there was one, was the amazingly low car count. Only 19 IMCA Late Models checked into the pit area, a number which was even lower than my expectations. You certainly can’t point the finger of despair at the folks who run QCS; they pulled out all the stops tonight, gave the drivers a great racing surface and staged an outstanding program.

The reasons for this could be many; the hot temperatures, lack of funding and or fear of tearing up machinery at what some have termed “the slaughter house of race tracks”.

The first two reasons are justified but the latter I don’t and won’t buy. Cars get torn up when driver(s) don’t use their head (or brake pedal) when they’re behind the wheel. Cars don’t wreck themselves, drivers do. QCS is really no different than any other track…

Car counts for Deery shows this season have hit a low point in the series’ history and when you can’t even get a full field of cars, some modifications need to be made. What those changes are, I don’t know and I’m not sure IMCA does either. I guess we wait and see…

Many thanks to all of the staff at for their hospitality and especially Marsha Woolley who was extremely cordial to me while checking in and answering any questions I had. I also had nice, but brief visit with Kevin Feller as well. Kevin, as many of you know, has been a fixture around there for several decades now.

The Hershel Roberts Memorial at Quad City Speedway will be on my schedule again for 2013.