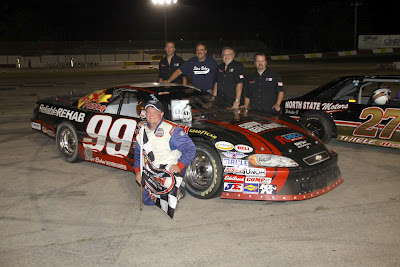 
Loves Park, IL – I finally made my anticipated trip to Rockford Speedway this past Saturday night and it was long overdue. Normally, the annual Spring Classic held there in late April, is historically the first race of the season for me, but lower back problems put the kibosh on that trip.

The Star Spangled 76-lap Late Model feature was the headliner for the program along with the other weekly classes; Sportsmen, American Short Trackers and RoadRunners. Being that it was close to the July 4th holiday, the RoadRunners, one of my favorite divisions to watch at the historic high-banked quarter-mile, also had one of their famous novelty events, the Flagpole Race. More on that later…

I’ve always considered Rockford my home away from home. Much like a college student coming back for the weekend from school and being spoiled by their parents every minute while their back, it’s much the same for me every time I return to Rockford. From the time I check into the pit shack to when I’m pulling out of the parking lot after the final race, everyone associated with the track makes me feel like I’m a part of the family. And that’s what keeps me coming back, year after year.

Upon my arrival there, I was greeted by my track photographer Jim Ambruoso, known as “Jimmy A” around the track. Jimmy A and I have become good friends over the years and not only did I get a firm handshake upon seeing him but a bear hug to boot and a “Good to see you Kyle, welcome back.” Jim is not only the track photographer there but is also in charge of media relations and also gives the invocation before the races. Over the years, he’s announced the races and even got up in the flag stand and twirled the silks when called upon. He’s a man of many talents… 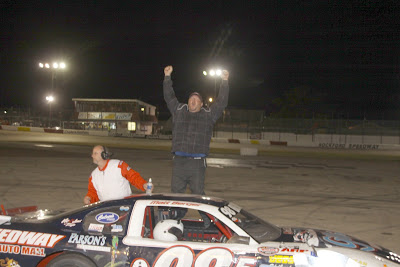 
Another employee there who displays his many talents is Eric Huenefeld, the track announcer. Over the years I’ve had the pleasure to listen to Eric give the play-by-play at not only Rockford and some ASA Midwest Tour events but Dubuque Speedway on Sunday nights as well. This year he’s added Madison International Speedway to his resume, which keeps him plenty busy, I’m sure.

There are a lot of great announcers here in the Midwest but Eric takes it to the next level as far as I’m concerned. The passion he has when calling the races is unequaled and his knowledge of both asphalt and dirt racing is unparalleled. It’s the little things that set him apart from other announcers and it’s simply because he does his homework before he even sets foot into the announcer’s booth.

So many announcers get behind the microphone the day of the race unprepared with nothing to talk about during those "dead times" in a program. Upon my arrival at Rockford on Saturday afternoon, I saw Eric grabbing a notebook, which probably contained 1,000 pieces of information that pertained to that evening’s festivities. Part of any successful racing program is making sure the show runs smoothly and Eric’s abilities to spout off facts and figures at a moment’s notice and keeping the fans informed up to the split-second is a huge part of making the program at Rockford go off without a hitch.

As much as I love a good late model race, the two divisions that I truly enjoy watch compete at Rockford are the Sportsman and RoadRunners. If you like great side-by-side action and edge of your seat excitement, these two classes of racing are just for you. The Sportsman division always promises a little “paint swapping” along with some hard-nosed competition while the RoadRunners are always going three and four wide through the turns and straightaways, yet somehow never wrecking. These two classes are a perfect example that you don’t need big motors and high speeds to put on an entertaining show.

Rockford Speedway owner Jody Deery and general manager Gregg McKarns are always looking to entertain the masses and one of the innovative ways in which they do that is by staging novelty races. This weekend I had the opportunity to watch the “Flagpole Race”. This has become an annual event over the July 4th weekend and is one of just many novelty races that the late, great owner Huge Deery created.

A big tractor tire is pushed to the front stretch with an American flag centered in the middle. The concept of the race is to have the RoadRunners take a few laps around the quarter-mile to get the tires warmed up and then when they exit turn four, slap the brake pedal and then make a sharp around the flagpole and continue around the track again. To watch 10 cars attempting to negotiate the tight turn around a small tire without running into each other is not only entertaining (and a little comical) but also a tribute to each driver’s ability behind the wheel. 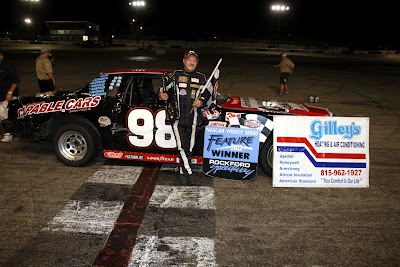 It was the ole guy Gene Marocco, # 98 from Rockford, IL who drove from the back of the pack to win his 20-lap feature event. - Jim Ambruoso Photo

As entertaining as the Flagpole Race was, the RoadRunner's 20-lap feature also provided some thrills as 72-year-old Gene Marrocco came from the back of the field to win the feature event. The popular Marrocco, who has turned a "few laps" on the quarter-mile over the years, showed the rest of the field how you get to the front.

The Sportsman feature was witness to some of the best racing I’ve seen in a while as Justin Sellers, who has been competing in that division for several years, becoming a first-time winner at Rockford. Sellers had to earn his first win the hard way, starting eighth, making his way to the front and then having to make multiple attempts to get by cagey veteran Steve Lawver for the lead and the win. 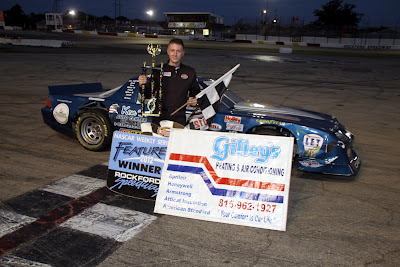 A big win for the young driver from Carol Stream, IL is # 99 Justin Sellers who made claim to his first feature win of 2012 in the NASCAR Bargain Hunters Sportsman division. - Jim Ambruoso Photo

This young man knew he had won a hard-fought battle too, upon getting out his car in victory lane, pumped his fists and let out a victory roar in front of an endearing crowd.

Rockford Speedway is truly unique. You never know what to expect on any given night yet you know something special is coming. You leave with the satisfaction you’ve been thoroughly entertained and you return the next week wanting even more. And in true Rockford style, they always deliver.

And that’s what makes this track a cut above the rest.

Thanks to Jody Deery, Gregg McKarns, Eric Huenefeld and especially “Jimmy A” for making me feel a part of the Rockford family. It always great to be back home.