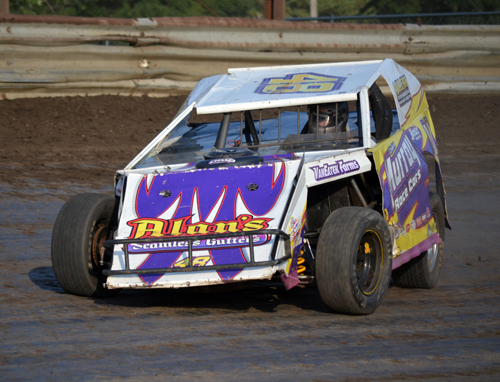 Oskaloosa, Iowa – When you continually hear good things about a racetrack and how its program is run, eventually curiosity gets the better of you and you make a point to go check it out for yourself. This was the case for me and Southern Iowa Speedway.
The IMCA Stock Car Shootout, one of my favorite racing events of the season, was the third leg on the three-day schedule, so I thought this was an ideal time to check out what all of the hullaballoo was about.
Southern Iowa Speedway has had a long distinguished history for big-time racing for well over 50 years but the last few years the big half-mile had suffered from poor management, low car counts and worse yet, shrinking crowds.
Enter Mike VanGendren…stage right.
VanGendren, who practically grew up at the track, decided to slip on the promoter’s hat and resurrect the track and the program back to its glory days. On all accounts, he has far exceeded expectations in his freshman season. Car counts have risen, the fans are coming through the turnstiles by the bunch, and the Wednesday night program is running like a finely-tuned machine.

VanGendren’s first step in reviving the Mahaska County Monster Half-Mile was getting IMCA back on board as the sanctioning body for the track. VanGendren, who still competes regularly in both a modified and stock car when he isn’t the boss, has always been a staunch supporter of IMCA racing, so when he came calling, the higher-ups in Vinton, Iowa, were more than happy to return to a track that have had a long history with as well. It’s been a great relationship…kind of like Richard Burton and Elizabeth Taylor; but the second time around.
Despite another hot, humid night, the stands were full of paying customers and the pits were chock-full of race cars wanting a chunk of the money being doled out. And there was plenty of cash being thrown around. The winner of the stock car main event earned $1,000, while the Modified and SportMod winners would also receive $1,000. Hell, even the Hobby Stocks would have the opportunity to earn something way above the norm, with the victor banking $700. 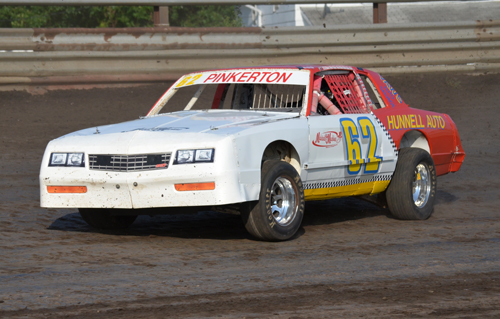 Brad Pinkerton came across the finish line second in the IMCA Stock Car headliner, but was later awarded the victory after initial winner Zack Vanderbeek was disqualified. - Kyle Ealy Photo

Zack Vanderbeek and Brad Pinkerton are two drivers who have earned their share of glory over the past few seasons at Southern Iowa Speedway and in the grand finale they showed the rest of a stellar field of Stock Cars the fast way around the big boy track. Vanderbeek and Pinkerton widened the gap between themselves and the rest of the group at the start and never looked back. When the checkers flew, it was Vanderbeek in an apparent runaway. By the time I got home, though, I discovered that Vanderbeek had been disqualified because of an illegal trailing arm (whatever the hell that is), giving the win and the $1,000 check to Pinkerton.
The fantastic prep work performed on the track beforehand shown its colors brightly in the Modified, SportMod and Hobby Stock features with all three winners coming from their eighth position on back. There was a top and bottom groove all night; it was entirely up to the driver on which one he chose. Once you decided, you could party like a rock star if you so choosed.
Jacob Murray started eighth in the IMCA Modified showcase, made his way smartly through the field and took home a $1,000 payday ahead of a star-studded entourage of Cayden Carter, Richie Gustin and Jayhawker David Murray Jr.
Jesse Sobbing, the IMCA SportMod kingpin, has been kicking ass once again this season and tonight was no different. Starting ninth, Sobbing patiently made his way past the other contestants and grabbed yet another victory. 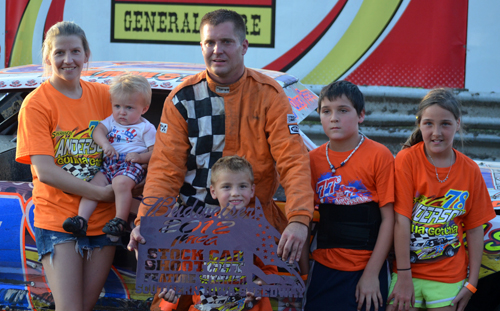 It was another day at the office for Shannon Anderson as he grabbed the $700 first prize after winning the IMCA Hobby Stock feature. - Kyle Ealy Photo

Shannon Anderson, the top honcho in the IMCA Hobby Stock category for several years now, made it look like child’s play, coming from his ninth starting position and seizing the first prize.
I’m happy to report that the Southern Iowa Speedway is back on track in part to Mike VanGendren and his outstanding dedication. It appears that the dark days are but a past memory and the best of times are on the horizon.
Thanks for picking us up,
Kyle Ealy