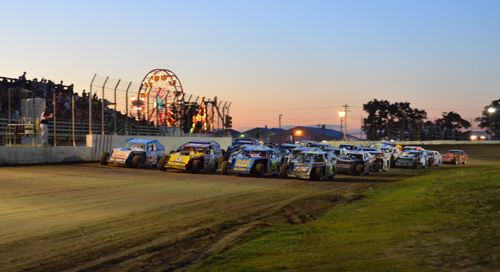 – The smells of fried food, the bright lights of carnival rides and the roar of engines brought me to for the 119th Great Howard County Fair and the Hawkeye Dirt Tour on Thursday night.
It had been a few years (2008) since I had been to the 4/10-mile dirt oval and it was long overdue. At one time, Cresco ran weekly program (like many others small-town tracks), but now they use it as a “specials only” facility. After last night’s show, it’s a shame they don’t use it more often.
Long-time race aficionado  Tom Barnes and his crew did an outstanding job, using all of their resources to display the pomp and circumstance that go with promoting a top-notch county fair race special. The grandstand was packed to the hilt, the track was extremely racy all night (it actually got better as the night went) and race cars packed the pit area. The crowd was a raucous bunch the whole night and the racing was first rate. What more could you ask for? 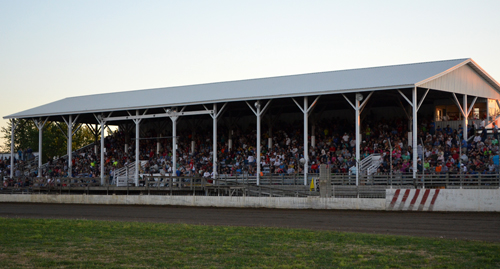 
The marquee event was the Hawkeye Dirt Tour for the IMCA Modifieds. Race director Bucky Doren has a good thing going with this series and tonight was another shining example. So far this season, there have been four HDT events with four different winners. You can make it five for five now with Mark Elliot’s victory. The series, now in its third year of operation has become a stellar showcase for IMCA’s star pupil. That’s what makes this series so appealing to both fans and drivers. Drivers like the competitive balance it presents itself and the casual race fan enjoys it because you never know who’s gonna be the stud in the pasture on any given night.
Elliot, starting from the seven spot in the 23-car field, quickly worked his way within striking distance of race leader Ryan Dolan and constantly applied pressure using the high side of the track. While Elliott seemed comfortable on the high side, Dolan favored the low groove and for the next 15 laps, these two veterans sliced and diced back and forth with Elliott getting his finger in Dolan’s nose on occasion but not able to pick it. 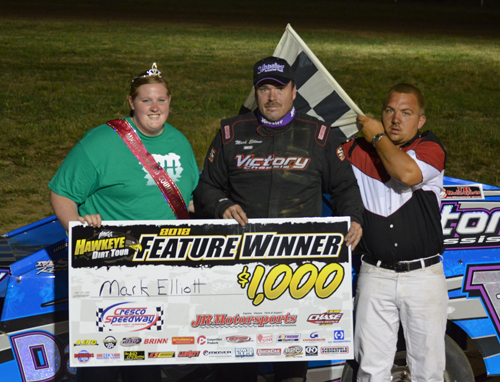 
That changed after a late caution when the hotshoe bobbled slightly in turns one and two allowing Elliott to take advantage. As Dolan recovered from his mistake, Richie Gustin slid into the second spot. While Elliott was off on his own, Gustin and Dolan fought for second place money, with Gustin finally getting the nod when the checkers fell. Darin Duffy and Jeremy Mills rounded out the top five. It was as  good as advertised…
The USRA Stock Car division finished the evening’s festivities and they equaled the Modified main event as far as excitement. This 15-lapper had the crowd on the edge of their seats and me on my tip-toes. As much as I enjoy the IMCA’s version of the Stock Car division, the USRA guys from the territory put on just as good of a show, if not better. Drivers like Mitch Hovden, Troy Reicks, Lynn Panos and Kyle Falck have been racing against each other for numerous years and are familiar with each other’s driving styles, which makes for good, clean and competitive side-by-side racing. These four fendered chauffeurs darted to and fro with three different lead changes with Hovden (who started fifth) capping off a fantastic night of racing and giving the fans in attendance a perfect nightcap. 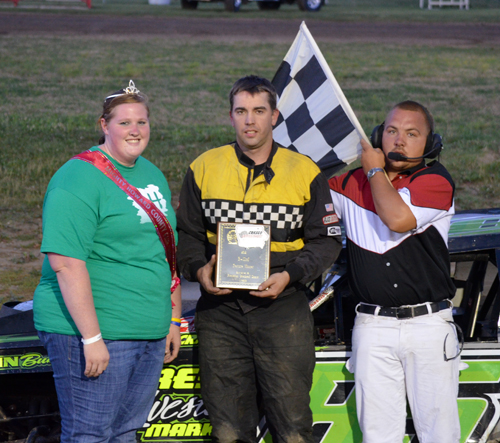 
In addition to the Modifieds and Stock Cars, the USRA B-modifieds (Ben Moudry) and Hobby Stock (Adam Cline) winners came from their fifth starting positions to score wins as well. This wasn’t a follow the leader racing surface by any means.
Tom Barnes, the Howard County Fairboard and everyone involved in putting this program together, should be highly commended for the job they did in presenting this show. This was a first rate, first class five-star event if there ever was one.
I’ll definitely have this on my schedule for next year.
Thanks for picking us up,
Kyle Ealy