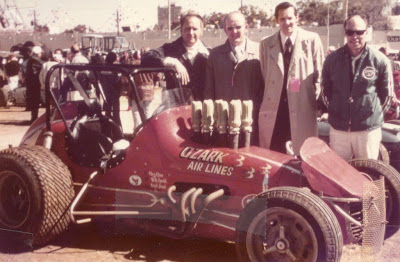 
Algona, Iowa (August 6, 2011) – As you may have gathered from reading past columns of mine, preserving the history of racing here in the Midwest is a big deal to me.

I’m extremely proud that my home track, Hawkeye Downs Speedway, has created a hall of fame to honor those who have a have contributed to it’s rich history. I’m even more honored to be apart of making sure that it happens.

As I’ve stated many times before, not enough tracks take the time to honor those who have made it what it is today. It takes a lot of hard work, dedication, and sacrifice to make it work. Probably why a lot of tracks don’t do it.

One track that does honor its racing heroes is the Kossuth County Racing Hall of Fame in Algona, Iowa. Starting in 2007, Rick Klein, Chad Meyer and other fairboard members decided to honor those who have made an impact on the racing scene in Kossuth County. Drivers, car owners, promoters and significant others who have made an impact have been honored.

Some of the names that have already been inducted are names that are familiar to race fans statewide. They include Jim Edgington, Denny Hovinga, Gene Schattschneider, Bobby Grim, Butch Householder, Stacy Redmond and Dick Forbrook…just to name a few.

Last year, I made my first trip to the historic track to take part in the festivities and I walked away thoroughly impressed and even a little envious. It was as well planned, well-organized and well-run ceremony that I’ve ever seen. I must admit that I “stole” a few ideas from their ceremony and brought them back to implement into our Wall of Fame.

This year’s induction ceremony was of particular interest to me. Because I didn’t become apart of the Hawkeye Downs Wall of Fame until 2007, I never had the opportunity to meet Buzz Rose, a 2004 inductee. I had heard many a Buzz Rose story from my Wall of Fame cohorts and own several of his books about the history of IMCA but had never had the honor of speaking to him face to face. With his induction into the 2011 Kossuth County Racing Hall of Fame, this would be my opportunity.

The story behind Rose being inducted into the Kossuth County Racing Hall of Fame is an interesting one. Near the conclusion of the 1972 season Rose was looking for a ride, and Algona’s Daryl Arend needed a driver. Rose and Arend paired up for race dates at the historic Knoxville Raceway and at the Clay County Fairgrounds in Spencer, Iowa.

They both took a trip to California to pick up a brand new front spring sprinter built by the legendary Don Edmunds. Rose, who at the time was a successful ground transportation business owner at the Des Moines and Cedar Rapids airports, helped secure sponsorship from Ozark Airlines on the Arend’s #1.

During the 1973 season, Rose and Arend traveled the Midwest, racing across Iowa plus stops at big state fairs such as Oklahoma City, Oklahoma; Sedalia, Missouri; Lincoln, Nebraska. They would go on to secure a fifth place finish in the final point standings that season.

Rose says that his relationship with Arend was a great one and he cherished their time together. He stated in his book, Show Biz Auto Racing that he was the best owner he ever wheeled a car for. As an car owner, I’m sure that Daryl Arends must have felt the same about Rose. Upon receiving his plaque, Arends was the first to offer Rose a heartfelt hug and congratulations.

I spent some time with Buzz and his two sons before the race and heard some wonderful stories that you won’t find in any book. For me, it was well worth the three-hour trip to hear from someone who was part of IMCA in it’s hey days.

Thanks to Chad Meyer for his hospitality during my visit. I’m already looking forward to next year’s induction ceremonies.