The Dollar and the Marquis 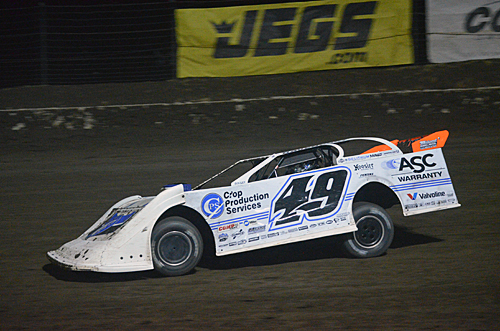 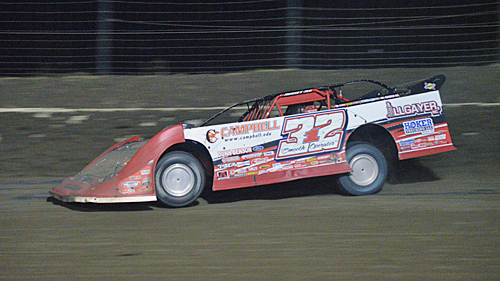 
Jonathan Davenport, who really didn’t have a chance in hell of catching Pierce was sitting in the catbird’s seat when Pierce pulled to the pits. Now it was over…
A couple of other drivers who showed nothing on Friday finished high on the scoreboard when the checkers waved.
Jimmy Owens, a former Silver Dollar Nationals winner, hasn’t seen the best of times this year but after starting 17th, garnered a podium finish with Davenport and Weiss. Tim McCreadie, the defending race winner, had a tough weekend and had to win the non-qualifier race, the “Belt Bash” just to get in the 33-car field. However, in the grand finale, McCreadie caught a second wind and finished a respectable eighth. Chris Simpson was the highest finishing Iowan, starting 26th and grabbing a top-10 finish.
The USMTS 35-lap finale was over before it started with Rodney Sanders starting on the pole. Sanders has had I-80 dialed in for several years, winning handily during every appearance, and it was a foregone conclusion that he was going to win again. Former USMTS national champion Jason Hughes made a valiant run at Sanders but in the end, the Happy, TX, pilot pocketed the $8,000 check.
As sluggish as the USMTS portion of the SDN was, I will point out that the officials of the Lucas Oil Dirt Late Model Series take heed on how to run an efficient program. While there was a lot of pissing around between heats and during yellow flags with the Lucas Oil crew, Todd Staley and his USMTS group ran off a snappy program both nights with no time wasted. I overheard a lot of other people making the same comments regarding USMTS’ well-run syllabus and Lucas Oil’s poor time management skills.
Aside from the racing, you always meet interesting people at I-80. One of the highlights for me was meeting Rollie Frink of Davenport, IA. A lot of you old-timers will remember Frink competing weekly during the 70’s and 80’s not only at his home track but East Moline, IL, was well. He was also a regular with the NASCAR Busch All-Stars. Frink is good friends with co-owner Steve Kosiski and comes to the Silver Dollar every year to help out.
Lee and I found him under the grandstands a couple of hours before the races on Thursday. Like everyone else, he was trying to find some shade and stay cool, so we sat down and chatted with him. As it turned out, we would do the same on Friday and Saturday. This was one of those times when I closed the mouth and opened the ears. Rollie had story after story about his racing days, a lot of which you won’t find in print; and some stories just not printable.
I spent most of the weekend hanging out with a couple of photographers, Chris Eiel and Amanda “Teapot” Reitan. If you peruse this website, you’ve seen Chris’ work on here. His passion is drag racing, but he’s been spending quite a bit of time watching cars go around in a circle at I-80 and Shelby County Speedway in Harlan, IA, the last few seasons. Amanda has been the track photographer at I-80 Speedway for three years now and does an excellent job there.
We pretty much took over turns one and two for the weekend, sending the “serious” photographers over to the other side of the track. We had a lot of fun for those three days…sometimes we even remembered to take pictures.
I thoroughly enjoyed my weekend at the Silver Dollar Nationals and I’m ready to do it again next year. Thanks to Lee Ackerman, Chris Eiel and Amanda Reitan for making my visit pleasurable. 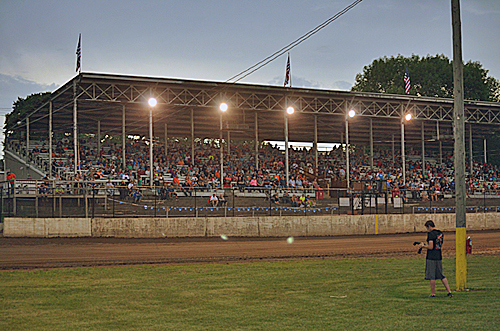 A great crowd was on hand to witness some great racing at the Fayette County Fair. - Kyle Ealy Photo
Wednesday, July 25, took me to another favorite track of mine, the Fayette County Fairgrounds in West Union, IA. The Deery Brother Summer Series was making its triumphant return to the 3/8-mile for the first time in over nine years (June 17, 2009).
Before I left Cedar Rapids I checked the weather forecast and radar just to be sure. While there was rain in the area, it appeared the heavy stuff would be well north of West Union…so away I went.
Upon arriving at the track and walking to the infield, I bumped into a familiar face from faraway. K.C. Rooney, whose originally from Waukon, IA, but has lived in California for the past 20-something years, was in the early stages of his annual two-week “Iowa Racing Trip”. I had met K.C. the first time over 10 years ago at a WDRL race at West Liberty. He too, had been at the Silver Dollar Nationals (how did we not bump into each other there?), pedaled a couple of days of RAGBRAI with family and now found himself in the tiny northeast community. He still had Fairbury, IL and Cedar Lake, WI, on his schedule. What a great vacation…
Along with the IMCA late models, B-modifieds, stock cars and hobby stocks, all sanctioned by the United States Racing Association, were the support group. By the end of the night, however, all four divisions shared the main stage with sterling performances.
The skies were dark off to the north, so track officials started clicking off heat races in apple pie order. No wasted motion here; as soon as the checkers waved on one race, the next line-up was marched out and the green was waving. We were making excellent time but right during the third and final heat for the late models, sprinkles became drops and the rains came. Not a heavy shower, mind you, but a nice steady rain any farmer would appreciate.
After about an hour delay, the blade came out to roll the track back in, followed by the sheep’s foot and finally, a wave of drivers came out to pack the track. Team work will get anything accomplished and this was a sterling example that there is no “I” in team.
The hearty faithful who came to watch some late models and great racing in general stuck it out during the delay and they were all richly awarded with what became an extremely racy surface. After finishing up the late model heat and a couple of hobby stock heat races, the fans in the stands and myself were treated to four very competitive features.
While the late models may have been the marquee, the support divisions made their own headlines with great side-by-side racing and finishes that came right down to the wire.
The late model finale saw Chad Holladay, last week’s winner at Columbus Junction, rocket to the lead at the drop of the green and it looked like the race was well in hand for the Muscatine, IA, pilot. Holladay’s car was a rocket ship and he built a sizeable lead.
But a caution late in the contest bunched up the field and, on the restart, Todd Cooney, who had started eighth, jumped past Justin Kay and Holladay and took over the top spot. Cooney would hold off an always stubborn Justin Kay for the win and the $2,000 check. Not bad for a guy who had his car loaded up on the trailer when the rains came.
It was a family feud of sorts when Brandon and Ryan Maitland decided to keep it in the family for B-modified honors. The two brothers dueled it out for the bulk of the feature event before Brandon pulled away. Ryan would fade in the late going and finish fourth. According to Brandon in victory lane, Ryan won the feature last year, just beating him out for the victory. So, revenge is sweet…even if it’s against you own kin.
The stock car contest was as good as it gets with a familiar name in northeast Iowa racing, Chris Hovden of Decorah, IA, in victory lane. Hovden and another stock car veteran, Tom Schmitt of Independence, IA, ran side-by-side for nearly all of the feature with Hovden winning by a car length. Behind them were Kyle Falck, Dan Jones and Lynn Panos having their own three-car skirmish. And behind them, Brian Mahlstedt, Kevin Donlan and Troy Hansmeier were staging their own three-car fracas.
I’ve said it once, I’ll say it again; the USRA stock car division in northeast Iowa is as good as it gets. I’d put them up against the IMCA guys any day of the week. 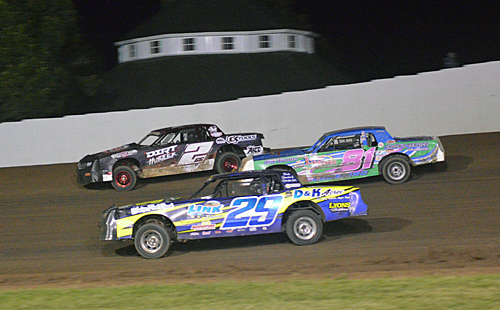 Three-wide racing was the norm all night at Fayette County Speedway. - Kyle Ealy Photo
The hobby stock feature ended the evening and what a show they put on. You could have literally thrown a blanket over the front three drivers, Justin Lichty, Josh Ludeking and Brady Link. Those three juked and jived all over the track and even threw a couple of sliders on each other for good measure. Like the stock car contest, the hobbies were going two and three-wide far back into the field.
Lichty, a veteran hobbyist from Waterloo, IA, finally was able to distant himself (but not a lot) to pick the victory. He gave credit to Ludeking and Link in victory lane for running a clean but competitive race.
A special thank you to the fine people of the Fayette County Fair and especially the ground crew who made what was a good track into a spectacular racing surface after an hour-long rain. As Todd Cooney said in victory lane, “You could run on the top, on the bottom or right down the middle if you wanted to, it was awesome!”
Everyone was a winner at West Union on Wednesday night.
Thanks for reading…finally after four years,