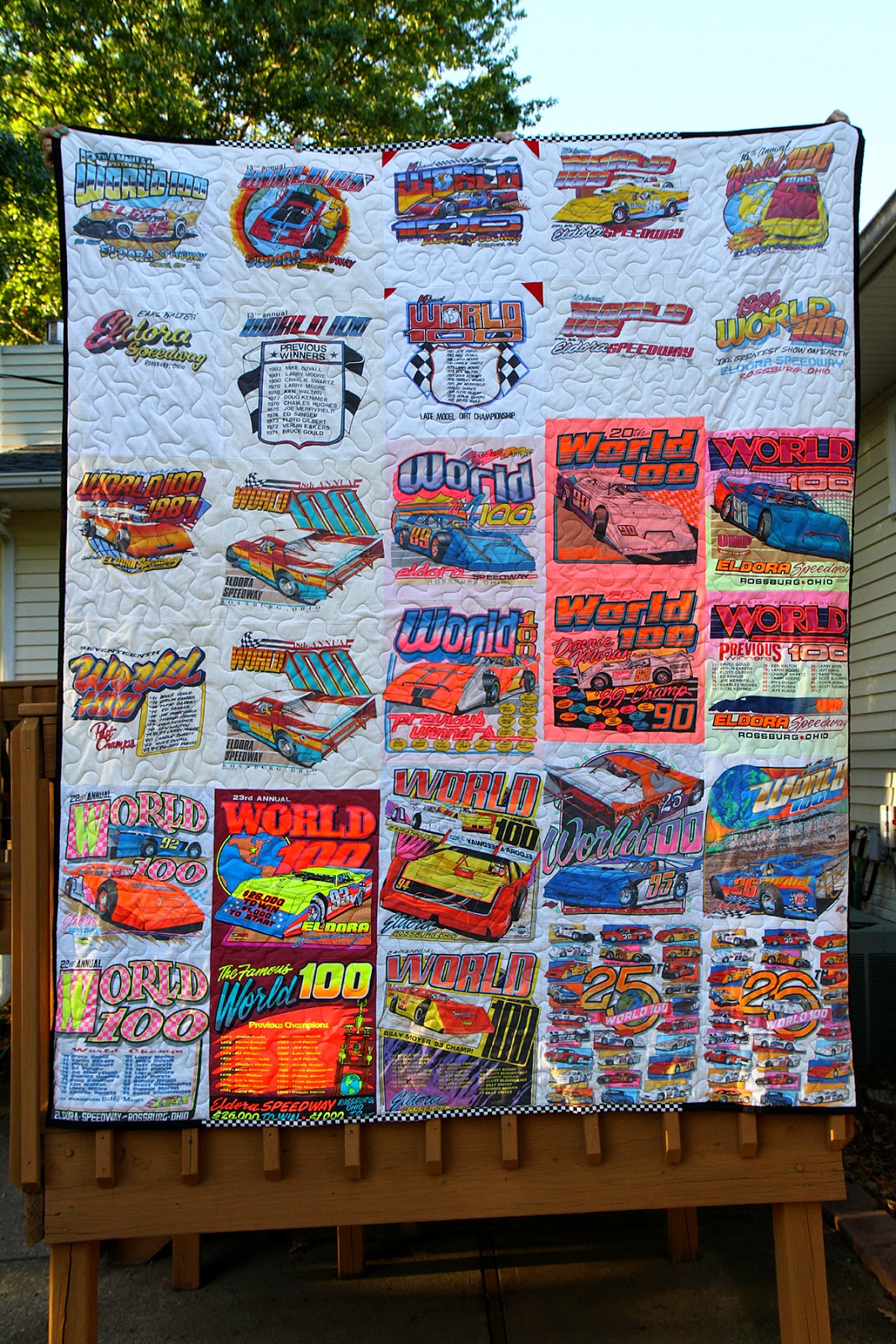 World 100 T-Shirt (1982 - 1996)
by Mike Ruefer
Davenport, IA - It’s that time of year again. Even after all these years of chasing races the one trip and race that I can hardly hold still for is the one and only, “The Grand Daddy of them All,” the WORLD 100. Most other events throughout the summer are just another race. Don’t get me wrong their fun and exciting, I’m always glad I went but they’re not Eldora. Most importantly, they’re not the World 100.
I’ll never forget getting the Hawkeye Racing News and reading the stories about Eldora in the 1970’s. Ohio seemed like another country away for me, considering I had not even crossed the Mississippi River into Illinois except to go to East Moline Speedway. The stories and results from those day time drama’s held on Sunday captivated me. Winners from the early years like Bruce Gould (1971), Floyd Gilbert (1973), Charlie Hughes (1976), Doug Kenimer (1977), Charlie Swartz (1980), and Mike Duvall (1982) made headlines. It was real cool to read about drivers from Iowa in that era that made the race and won. The stoic men of that generation were my hero’s and to know that they could beat the best from the east fueled my desire to go to Eldora Speedway someday.
Verlin Eaker (1972), Ed Sanger (1974), Joe Merryfield (1975), and Ken Walton (1978), set the stage for my Iowa Pride and for them to have won the biggest race in the world said it all to me. I had to make this long trip, somehow someway but with no car and no money I did the next best thing. Since I had a few friends who were going in 1982 for their first time, I asked them if they could buy me a t-shirt. Anything with Eldora Speedway on it would have been fine but it was an actual 12th Annual World 100 t-shirt. I was ecstatic to get it and wore that shirt for years. For the next three years I had friends buy me a shirt and then finally it happened. I went to my very first World 100 in 1986. It became the experience of my race fan life.
The scene is as it always is at Eldora Speedway as you drive highway 118 toward the track. Travel trailers, motorhomes and tents galore tell you that this is not just another race. I was so un-prepared for what I was doing on that first trip. I’d never been to any big event before and I was in awe. The people, the cars, the track and finally my t-shirt, imprinted me with a genetic homing beacon so that in the week after Labor Day I instinctually head toward Ohio.
There are race tracks where one bad experience might deter me from wanting to go again but not Eldora and the World 100. Rain, mud and being stuck in the pits for hours during Friday qualifying didn’t keep me from going back in those early years. Long lines at the concessions and rest rooms didn’t either. I guess what I saw in 1986 with Jeff Purvis running the high banks on a rail was all I needed to say, “I’m going to come back”. And I have every year. It’s the only weekend I will not let work, family or almost anything keep me from going. It’s the only race I don’t care what anyone else wants to do or where they want me to be. I’m going to be in Rossburg Ohio at Eldora Speedway for the World 100!
Probably one the coolest t-shirts over the years that I like to buy are from Arizona Sport Shirts. Instead of just driver names on the back of the shirt, they put pictures of the cars on the back for the 25th annual race in 1995. That was the best shirt ever. Back then and to this day when I wear one of those designs I’ll stare at the back and daydream. Pictures of those cars can almost take me back in time. The race of the 90’s for me is probably 1995 and “Black Jack” Boggs. It was a memorial win and season for Jack Boggs and for anyone who tries and fails so many times like Jack Boggs did, his victory was special. 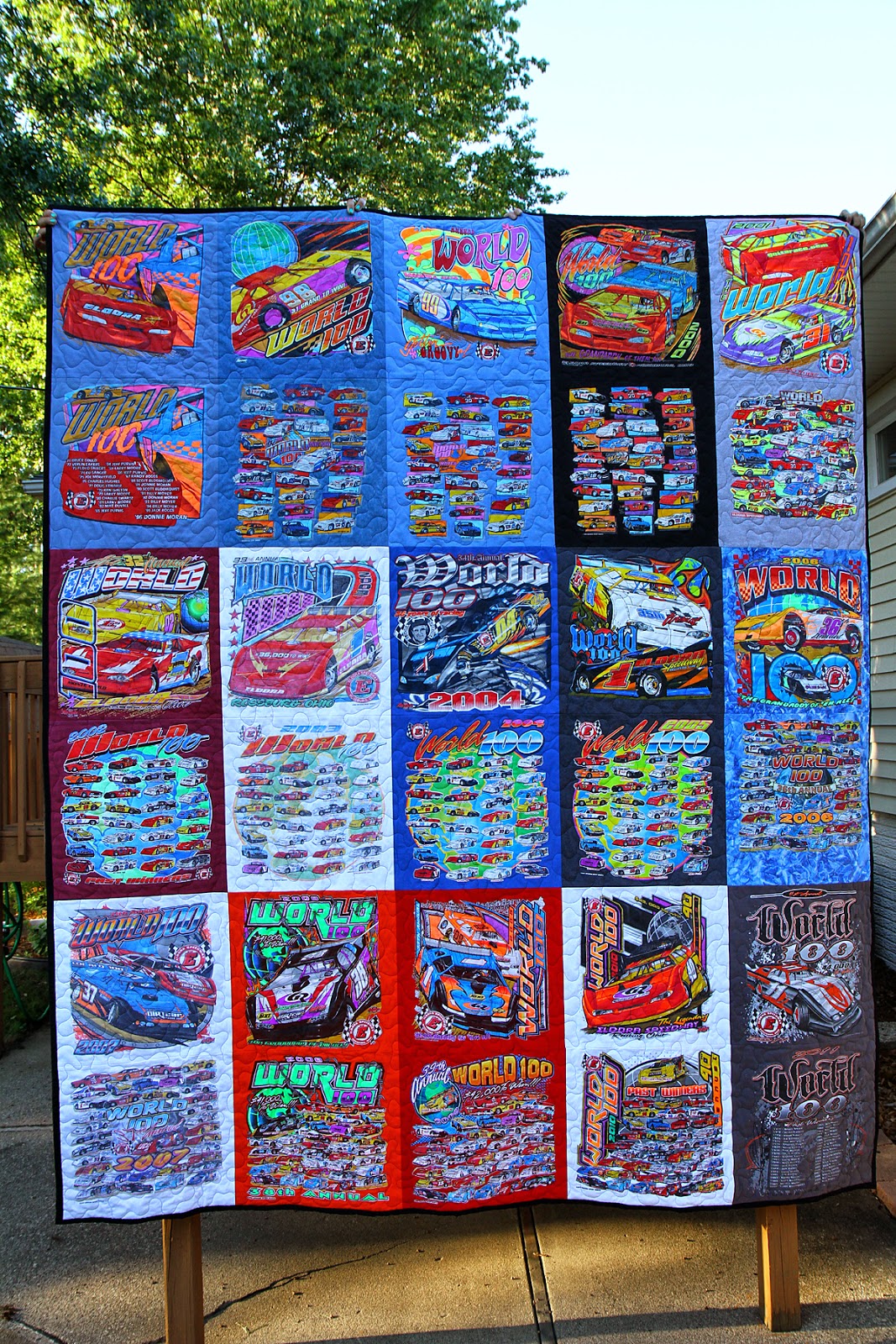 
The World 100 is hard to win and it should be. It’s the most prestige’s race in all of Dirt Late Model racing. I see that in Victory Lane and hear the emotion in the driver’s voice while being interviewed. A Dirt Late Model Driver might win many other races but to win the World 100 and to hoist the globe trophy means he did something special and could seal his deal for a trip to the Hall of Fame. Doing it once like Randy Boggs (1987), Steve Francis (1999), Dan Schlieper (2003), Chub Frank (2004), Dale McDowell (2005), Earl Pearson Jr. (2006), Shane Clanton (2008), Bart Hartman (2009), and John Blankenship (2013) is astonishing. Winning the race twice, three or four times is almost unbelievable. Larry Moore (1979, 1981, 1985), Jeff Purvis (1983, 1984, 1986), Scott Bloomquist (1988, 1990, 2001), Donnie Moran (1989, 1992, 1996, 1997), and Jimmy Owens (2007, 2011) are all multiple winners etched in Eldora lore.
Now I’ve left two drivers out till now. Like I said for me it’s an Iowa thing and now I mention Billy Moyer and Brian Birkhofer. First is Billy Moyer. While he may call Batesville Arkansas home to me he is an Iowa guy from Des Moines. We’re the same age and I’ve been one of his fans since the first time I saw him race. Watching him win the World 100 SIX times (1991, 1993, 1994, 1998, 2000, and 2010) has been a phenomenal feat. With each victory he has put his name even higher on the list as the best dirt late model driver of all time.
Last but not least is our Muscatine Iowa hero and two time (2002, 2012) winner, Brian Birkhofer. Those two wins left me shaking on the final laps and at the checker flag. For someone who got to see his dad Dave race and then Brian race at an early age, that last corner banzai move in 2002 to get ahead of Scott Bloomquist at the line was electric. His win in 2012 was dominate and just as nerve racking as if something would go wrong but did not. Bottom line and with my fuzzy Iowa math, 12 World 100 Trophies reside in Iowa.
Winning the World 100 at Eldora Speedway is special. Great drivers have won the race while other great drivers have failed. The prestige of winning will follow a driver for the rest of their life. After the money is spent and Globe grows dusty with time, their name will forever be immortalized every year on...
“The Legendary World 100 T-Shirt”