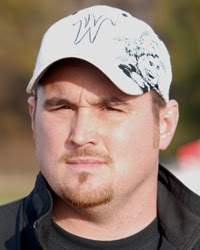 
Ryan McAninch of Wichita, Kansas has been suspended from all Speedway’s Inc. promoted events as well as National Championship Racing Association sanctioned races for two full years, effective immediately, it was announced Friday morning.
McAninch and fellow Wichita driver Don Hodge were both competing for the lead during the nights feature finale when both drivers made contact, sending McAninch to the pits to repair a flat tire. He then got out of his car and threw his helmet at Hodges’ race car and made a scene. Upon entering the race track, McAninch then waited for Hodge to pass him entering turns one and two and deliberately rammed his modified into Hodge’s, causing both drivers crash into the turn two wall. McAninch then exited his car and began fighting with Hodges.
“Ryan used his race car as a weapon and put nineteen other drivers at risk as well as my officials and track workers,” said Hall. “This is something that will not be tolerated at any of our events and hopefully this will send that message to not only Ryan but others as well.”
Mr. Hall also informed that Hodge has been placed on one year probation for fighting.