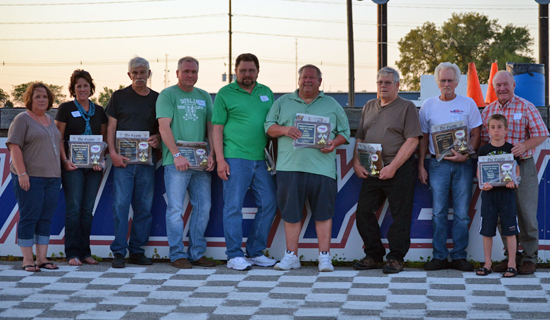 Cedar Rapids, Iowa – There is one time out of the racing year, when I am in awe of my surroundings. I keep my mouth shut, my eyes and ears open, not an easy thing for me to do at times.

Friday, June 8 was Hawkeye Downs’ annual Wall of Fame ceremony, honoring those who have made a positive impact at the track and for the sport. Eight more outstanding individuals were inducted this evening, including the Blankenship brothers, Gordon and Lem, car owners Vince Fiala and Russ Lyman, drivers Jerry Epperson and Bill Bennett Jr., tow truck driver Sonny Crow and the late, great sprint car pilot Eddie Leavitt.

With Midwest Racing Archives, I’ve had the opportunity over the years to type their names in some of the stories I’ve written. To actually put a face with that story and meet these people in person, well, I for one feel very blessed. In addition to this year’s honorees, past inductees always show up to reminisce, swap stories, and tell a few lies.

This year was a little different, however…some of the previous honorees attended to pay their respect to the newest class. 2003 Wall of Famer Curt Hansen was there to honor Vince Fiala. Hansen had some of his best years behind the wheel of Vince’s cars in the late 70’s and early 80’s. “I haven’t seen him in over 30 years, but I had to come down for this. I can’t begin to tell you how much Vince did for me over those years,” Hansen told me.

Car owner Russ Lyman received the same treatment with past inductees Roger Dolan (2003) and Mike Niffennegger (2010) showing up on this evening to honor him. “Russ was absolutely a great guy to drive for,” remarked Dolan.

Gordon and Lem Blankenship sat down at the same table that Wall of Famer Jim Gerber (2011) was seated at and soon the stories about the “good old days” of racing started. I could have sat there for hours listening to these guys. The stories I heard you won’t find in any newspaper or on any website, and that’s what makes this event so special.

Eddie Leavitt, who passed away in 2003, was represented by his daughters, Vickie Agan and Mary Saunders, who made the trip from Knoxville, Iowa and Kearney, Mo., respectively. Leavitt was inducted into the prestigious National Sprint Car Hall of Fame in 2001, but his daughters both pointed out that his induction into the Wall of Fame was just as special to them.

Since joining the Wall of Fame committee in 2007, it has become a labor of love for me. It takes careful planning and is a lot of hard work, at times very stressful, but when everything comes together it makes for a special evening. The smiles, the hugs, the laughter and the tears…even the occasional, “Hey, thanks for doing this, it’s really great,” makes it all worth it.

Saturday, I headed to Adams County Speedway in Corning, Iowa, for the Super Late Model Racing (SLMR) special. While driving west on Highway 34, I thought back to the last time I had been to ACS and it had been awhile, 2007 to be exact.

Upon my arrival, I noticed not much has changed in my five-year absence. The facility is still one of the better ones around and the black gumbo racing surface is still as racy as ever. The weekly show, one of the best in the state, still brings in a large amount of cars (101 on this night, including 29 late models) and their loyal race fans show up in abundance.

“Not what we have but what we enjoy constitutes our abundance.” - Epicurus 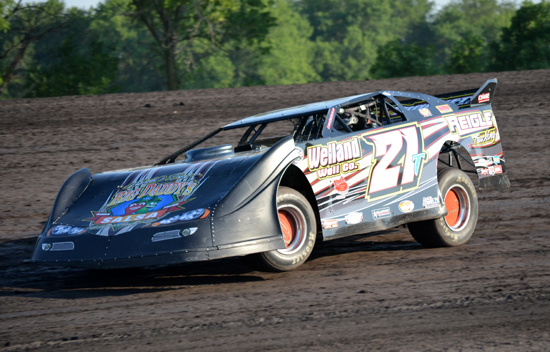 Travis Dickes finished second in the SLMR feature, yet he earned $50 more than the winner

This was my first opportunity to see the SLMR in action and I honestly knew very little about the series. One unique aspect I discovered was the winner receives $1,000 and the first loser receives $1,050. That, apparently was the idea of Steve Kosiski, part owner/operator of SLMR (his brother Joe comprises the other half).

Speaking of Steve, Adams County Speedway, which is a big half-mile, is famous for their long straightaways and narrow corners, kind of a paper clip configuration. I remember reading a quote of Steve one time regarding the long front stretch at ACS. “The straightaways at Corning are so long, you almost have too much time to think about what you’re going to do when you approach the corner. By the time you get there, you’ve either overshot it and went over the edge or just plain looped it.”

Sure enough, Steve knows what he’s talking about. On several occasions, drivers racing for a position would come in hard and fast, overshoot the corner and not only lose the position they were fighting for, but drop back a couple of more spots and have to start all over again. 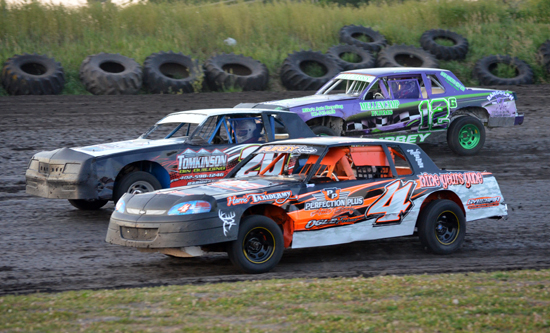 The racing throughout the night was great, if not spectacular at times. Despite another gusty western Iowa evening, Ray Houck and his crew did an excellent job of preparing the racing surface. The black gumbo really retains the moisture well and in turn, furnishes drivers and their cars with a multi-grooved track. The heat races in a five divisions; hobby stocks, pro stocks, B-modifieds, A-modifieds and late models were exceptional, with two and three-wide racing all night.

And to further prove that this is no follow the leader track; the feature winners in all five divisions came from the fifth starting spot or further with Brett Shepard capturing his first career B-modified feature win from the ninth starting position.

ACS is a great racing venue and after a solid night of racing there on Saturday night, I asked myself why it had taken me so long to get back there. I promise it won’t be another five years…