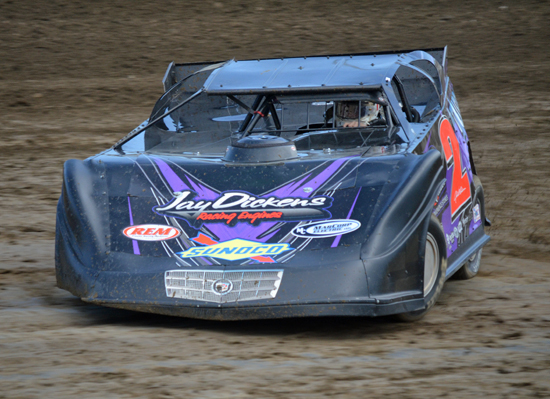 John Anderson wins the CBC/MLRA Alphabet Soup Race at I-80 Speedway on May 27. - Kyle Ealy Photo


– “A great wind is blowing, and that gives you either imagination or a headache.” - Catherine The Great
My Memorial Day Weekend adventures took me to I-80 Speedway in , on Sunday for the annual Alphabet Soup Race featuring the Midwest Latemodel Racing Association (MLRA) and Corn Belt Clash () in a combined show.
This has to be one of the more original names for a race of any kind. When they originally started this annual event, it consisted of three sanctioning bodies of late model racing competing against each other; the Midwest Latemodel Racing Association (MLRA), the National Championship Racing Association (NCRA) and the now-defunct World Dirt Racing League (WDRL), hence the Alphabet Soup Race moniker. Pretty catchy, huh?
Upon my arrival there Sunday afternoon, it was looking doubtful that there would even be a race. The weather forecast was calling for 50 percent chance of rain and with 25 to 30 mile an hour gusts sweeping across the plains, it wasn’t what I would call ideal racing conditions. My trusty MRA sidekick, Lee Ackerman, who I was visiting during my stay, had been keeping an eye out on the radar and sure enough, it appeared that heavy rains were in the cards. Somehow, the weather Gods spared us, the nasty stuff went around us and the races went on.
While the rain stayed away, the winds didn’t. The state of is normally a windy state and Sunday was no different. Most of the evening, 25 to 30 mile an hour gusts swept thru the facility blowing everybody and everything in its path. The winds were so strong at times, at one point as I was standing on a concrete block taking photos, a gust of wind knocked me right off my perch.
At any other track, a windy day like this would translate into a dry racing surface followed by one-lane racing, but Joe and Steve Kosiski, the track owners at I-80 Speedway, know full well on how to compensate for such adverse weather conditions and the racing surface was in tip-top condition throughout the evening with multi-grooves in which to compete on.
The forecast, I’m sure, scared away some drivers for this event. Historically, the Alphabet Soup Race has attracted anywhere from 45 to 60 late models, but only 29 late models checked in this day. While it was short on quantity, quality more than made up for it.
John Anderson, Todd Collins, Kyle Berck, Travis Dickes, Corey and Justin Zeitner, and Chris Spieker were there representing the MLRA side of things, while Chad and Chris Simpson, Dave and Denny Eckrich, Jason Rauen, Kevin Sather and Tim Isenberg were present sporting the colors.
John Anderson would win the 50-lap, $5,000 to win event, but the driver that everyone was watching was Jason Rauen. Jason Feger may be known as the “Highside Hustler” because of his love for hugging the top of a racetrack, but Jason Rauen took this feat one step better on Sunday evening. He goes by the nickname “Hammerdown” but we may have to start calling Rauen, “The Rim Rider”.
As the feature started, most of the field dove for the bottom and seemed fairly content to stay there, in hopes that the driver in front of them would bobble or lose their footing so they could make a safe and easy pass.
Having finished sixth in his heat, thus giving him a starting position on the inside of row eight, Rauen had some ground to cover if he was going to get to the front and I’m sure he realized fairly quickly, that the bottom wasn’t going to be the way to go. The top side of the track had been untouched for the most part so that’s where Rauen headed. 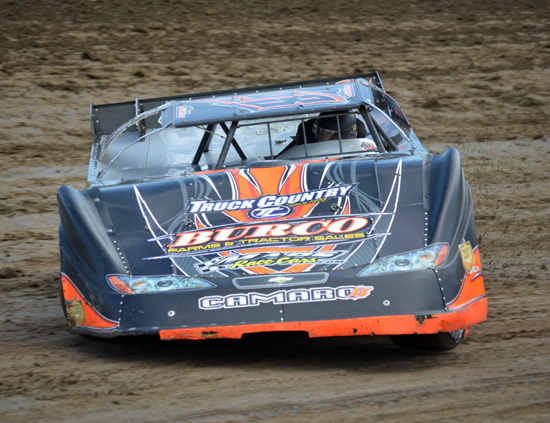 Call him whatever you want, but Jason Rauen can put on a show. - Kyle Ealy Photo

Most drivers will usually avoid the top side in fear of tagging the wall and tearing up their equipment or going over the edge and landing on their lid, but Rauen’s reasoning for going where most men fear to tread isn’t for a lack of brains but more so because he packs a big set of nuts.
Coming dangerously close to the wall as the laps ticked away, Rauen proceeded to pick off car after car.  As hit the turns, Rauen would pitch his late model sideways, the tires spinning and the rooster tails in full plume. Stationed on the backstretch, he had Lee and I’s attention right away and pretty soon, he had everyone in the grandstands’ attention as well.
It was a thing of beauty watching Rauen do his thing up there with everyone watching and waiting for Rauen to tag the wall or lose control, except it never happened. Unfortunately, the meaty section where Rauen was going was soon chewed up and the laps ran out. Still, Rauen finished a respectable fourth and I’m sure earned some new fans with his high-flying acrobatics. 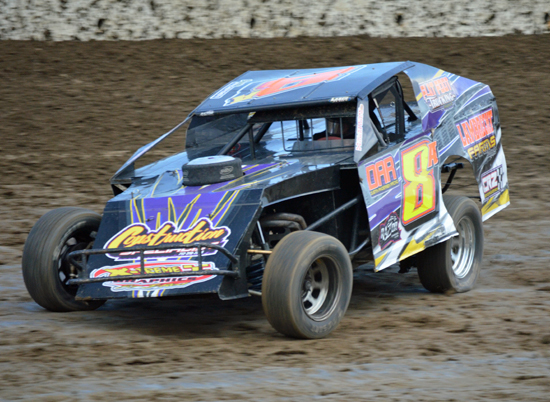 
The IMCA “type” modifieds ran as a support class to the late models but with some of and ’s very best modified drivers checking in this would have been a main event headliner event on any other night. Heavy hitters such as Johnny “The Jet” Saathoff, Dylan Smith, Jordan Grabouski, Chris Abelson, Jay Noteboom, Nick Deal and Josh Most were present and accounted for and put on a stellar show. When the smoke cleared, it was Dustin Andersen of , who put on a dominating performance in picking up the $1,200 payday.
The IMCA “type” hobby stocks made a rare appearance at I-80 as well and made the most of the opportunity with a fantastic duel between Jeremy Auten and Dusty Van Horn in their main event. This race literally came down to the wire with Auten passing Van Horn coming out of turn four as the checkers were waving and winning by only a couple of feet at the finish..
It was a well-run efficient program with hot laps starting at 5:30, racing at 6:00 and Lee and I pulling out of the parking lot at exactly 9:05. The Kosiski’s show a lot of personal pride in the product they put out each and every week and it makes I-80 Speedway one of the ’s premier racing facilities. I’ve never been disappointed in the quality of racing during my visits there and it’s well worth the five-hour drive each and every time.
I need to give out a special thanks to Lee Ackerman for his hospitality during my stay.

“Dirt makes a man look masculine. Let your hair blow in the wind, and all that. It’s okay; all you have to do is look neat when you have to look neat.” - Hedy Lamarr
Monday afternoon, I headed towards home but made a stop in , for their annual Deery Bothers Summer Series for IMCA Late Models program.
Last year’s show in which I attended was bitten by windy conditions all day long and despite several attempts to farm the track and give the drivers a racy track, it was one-grooved for most of the program with drivers hugging the bottom. I had high hopes for a different outcome this year, but unfortunately, the program was much the same way for the second straight year. While not as breezy as last year, the wind still played a factor in the track’s conditions and despite multiple attempts by the grounds crew at making the surface racy, it just wasn’t meant to be.
As was with the shortage of late models at I-80, the Boone show wasn’t much better, with only 23 cars checking in for the evening’s revelries. The Deery show at ’s “Action Track” is usually one of the higher drawing cards on the schedule, but not so this year. Noticeably absent were pilots from the Burlington, Davenport, Des Moines and Quad City areas that would have (and should have) normally been in attendance.
Where the hell was everyone at?
As with the Alphabet Soup race, the Deery Brothers field may have been short on cars but there was value in who showed up. The top 11 drivers in the point’s standings, led by Mike “Guitar” Murphy Jr., of , were there and that made it worth sticking around to see how it would end.
As it was, Murphy, who dominated his heat event, drew the number two pill and made it clear (again) that he’s going to be the man to beat this season. He grabbed the lead at the drop of the green and despite a persistent challenge from Tyler Bruening at times, held on for all 40 laps for this third win of the year. 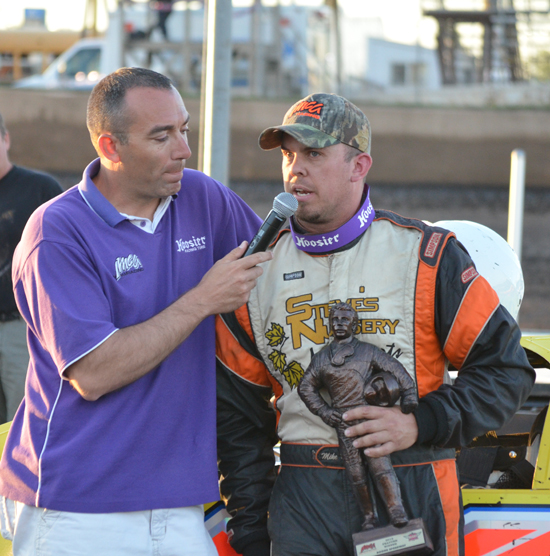 
There was some excitement in the middle of the pack with the Eckrich boys and “Ironman” Darrel DeFrance getting into a little extra-curricular activity. It’s always good to see that some of the old guard still enjoy getting their blood pressure up on occasion.

It was good to see Jeff Mitrisin of Oskaloosa back in action after his nasty tumble at the Marshalltown Deery less than a week ago.
With a two-hour drive home, I cut my evening short after the late model main event and left. The three remaining features, as it turned out, went quick as a bunny and the program was over at the reasonable time.
Thanks to Robert Lawton and his staff during my visit to Boone Speedway.
“Great balls of fire! Don’t bother me anymore, and don’t call me sugar.” - Scarlett O'Hara (Gone with the Wind - 1939)