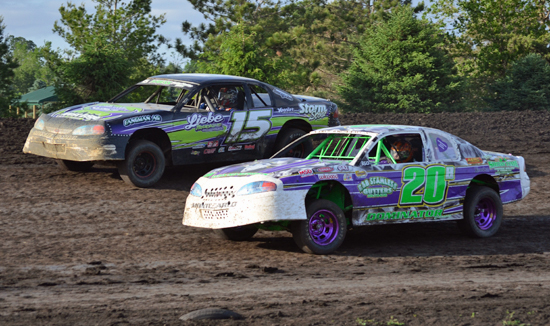 Andrew Burke (20B) and Norman Chesmore (15) fight for position during the  IMCA Stock Car feature at Benton County Speedway on Sunday, May 20. - Kyle Ealy Photo

Vinton, Iowa – It was a gusty weekend, so I decided to stay at home on Friday and Saturday. Windy (gusty) weather makes for dry racing surfaces (no matter how much water you dump on it) and when the track is dry, it gets dusty and loses its grooves. One lane freight train racing is usually the end result. No thanks, I’ll find something on TV to watch…
By Sunday, however, I was getting the itch (more of a rash actually) to see a race, so I decided to pack up my racing gear and make the short trip to Benton County Speedway in Vinton, Iowa, for their Sunday night weekly program.
BCS has been starting their program an hour early this month of May, so getting five divisions in the books and finished in a reasonable amount of time has been a pretty regular occurrence. This evening’s program was no different. Hot laps started at 5:30, racing at 6:00 and the final checkered dropped at approximately 7:55. Mick Trier, the long-time promoter there, didn’t even have to flip on the light switch.

I can’t remember the last time (if there was one) where I left a racing program and the sun was still shining brightly. I was home by 8:30, had photos uploaded and posted and was in bed by 10:30. I could do that every weekend…

By Sunday, the Friday and Saturday night gusts had toned down into a light wind and track conditions at BCS stayed reasonably well up until the last feature. With a good racing surface comes good racing and it was a great night for it. Two of the feature winners came from the middle of the pack to take feature wins, which just goes to show how racy the surface was.
As always, the fendered divisions of IMCA, the hobby stock and stock car classes, went above and beyond in pleasing the crowd and one photographer standing in turns three and four.

Scottie Pippert has been the kingpin of IMCA Hobby Stock racing at BCS and tonight was no different as he grabbed another feature win. With Pippert starting in the fourth row, Rod Grothers took the early lead in the contest and it looked as though he had the horsepower to win it early, but low and behold Scottie “Too Hottie” made his way quickly to the front and settled in the second spot. After toying with Grothers for a few laps, Pippert made the pass and grabbed another victory. “Pip”, as I like to call him, has something under the hood that nobody else has this season, so it won’t be a surprise if he collects 25 to 30 feature wins and contends for regional and national honors before it’s all said and done this year. 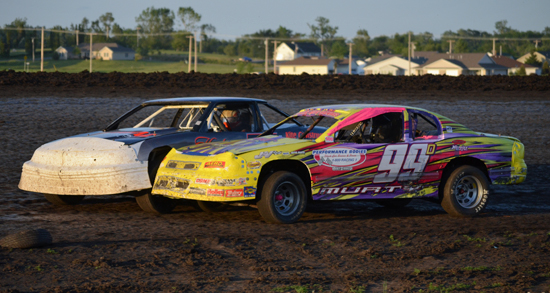 Damon Murty (99D) and Phil Holtz swap paint as they battle for the lead in the IMCA Stock Car feature. - Kyle Ealy Photo

The IMCA stock cars never disappoint and tonight was another classic example why this is IMCA’s best division, bar none. As good as the heat races were the main event lived up to its billing. Damon Murty and Phil Holtz, two of the best, put on a tremendous side-by-side battle, trading the lead numerous times and even a little paint for good measure. Murty finally got the lead for good, hugged the bottom for the remaining few laps, cutting off any chance of Holtz getting by for one last hurrah. Norman Chesmore, who traded blows with Murty earlier in the contest before yielding his position to Holtz, finished a strong third. It was as good of a race I’ve witnessed this season so far. 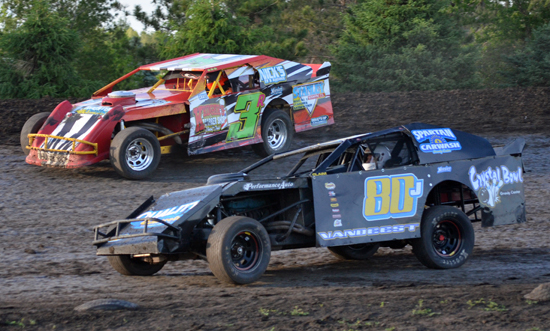 I’m not a lover of the IMCA SportMod division, but Danny Dvorak and Duane Van Deest put on a pretty fair showing for their feature event as well. Van Deest took the point at the wave of the green while Dvorak, who started in the fourth row, made his way to the front. With some nifty driving thru the field, Dvorak made his way to Van Deest’s bumper. Dvorak sand-bagged Van Deest for a few laps before making his way around and leading the few remaining laps to take his second win of the weekend (he also won the previous night at Independence). It was a great display of driving skill on Dvorak’s part.

As always, you can find the complete rundown of the night’s events on Ryan Clark’s In Staging.
http://instaging.blogspot.com/2012/05/murty-scores-marion-cottrell-memorial.html

Speaking of Mr. Clark…I always enjoy reading Ryan’s columns and all of his statistics he comes up with. I was just reading Ryan’s follow-up on Independence and noticed a miss-spelled word. Being the good friend that I am, I pointed out the error to Mr. Clark upon seeing him Sunday evening. 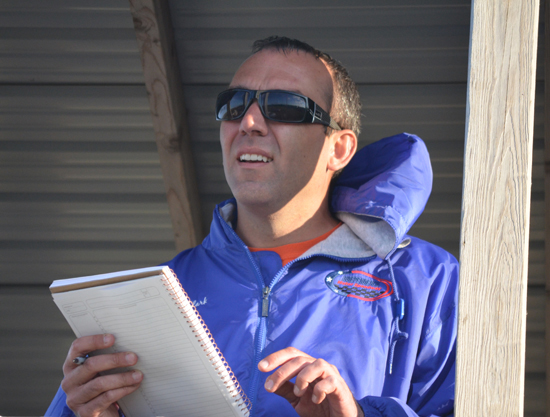 “Kyle, thanks so much for pointing that out, I’ll get that corrected when I get home tonight” was the response I was looking for; “You’re a Douche” is what I got in return. So, in addition to working on Ryan's spelling, we now have to work on his inability to take constructive criticism as well. As always, it was great seeing you my friend…


The weather was perfect, the racing surface ideal and everyone was home at a reasonable time. It was a great night of grass roots racing at Benton County Speedway.
Thanks for picking us up,
Kyle