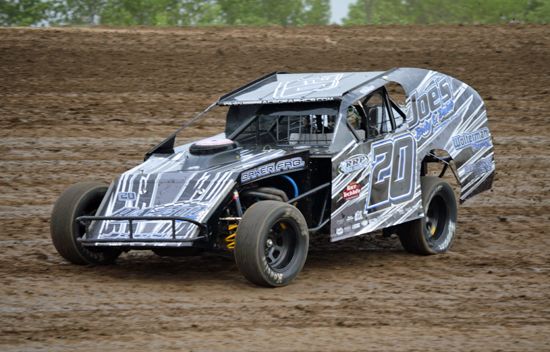 , – I’m feeling extra lazy, so instead of writing two separate columns on two different tracks, you’re getting the combo package.

With no plans to go anywhere specific on Friday night, I had narrowed it down to two tracks, Columbus Junction and . Columbus Junction was having IMCA “type” late models….Mo-Town was hosting their annual Cliff Chambers Memorial. My gut feeling said , so with a handful of change and a pocketful of dreams, I headed down the Lincoln Highway.

Cliff Chambers was a key figure in the development of grass-roots racing at the Central Iowa Fairground in the 70’s and 80’s. Cliff performed about every duty there including promoting the track for a few years. The extremely popular Chambers passed away from cancer in 1989 and every year the track has one night in which they honor Cliff and his contributions. 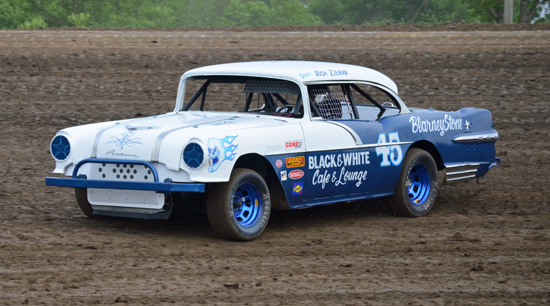 Josh Zieman, grandson of the legendary Ted Zieman, won the vintage race at Marshalltown Speedway. Zieman drivers a 1956 Pontiac, which is a tribute car to another legendary driver, Charley Hart. - Kyle Ealy Photo

A couple of things you can always count on during your visit to ; lots of cars and great racing. Everyone was treated to both, despite a gusty wind, which dried out the track in no time. By the time hot laps were finished, the dust was flying in abundance.

Thankfully, it didn’t seem to make a difference in the racing action. With the exception of the Modified contest (a Jimmy Gustin cake walk), the Stock Car, Hobby Stock and SportMod features produced solid racing from top to bottom with down to the wire finishes.

Brian Irvine of , is one of those guys that no matter where he starts, you know he’s going to be at the front when it’s all said and done. He’s that guy who just dominates no matter what the track or who the sanctioning body is. When you have the words “Whoop Ass” painted on your car, you better bring a can of it with you every night. I’m guessing must have cases and cases of stocked up in his garage at home.

Starting 10th in a very tough and talented field, methodically moves his way through the field. He isn’t in a hurry; he just picks his spots to pass, makes the pass, and moves on to the next victim. Sure enough, with a few laps to go, he’s sitting in second place sand-bagging race-long leader Andy Bryant. Again, he doesn’t seem to be in a huge hurry….he knows he’s going pass Bryant; it’s just a matter of when and where. With just a few laps to spare, decides it time, motors by Bryant, checks out, in victory lane getting his picture taken, and heading to the pit shack to pick up his paycheck. Just another day at the office for Brian Irvine…

A little chilly, a little gusty and dusty, but overall, it was a solid night of racing at the house that Toby K built. Benton County Speedway may be the birthplace of affordable racing, but Marshalltown Speedway is where they perfected it. 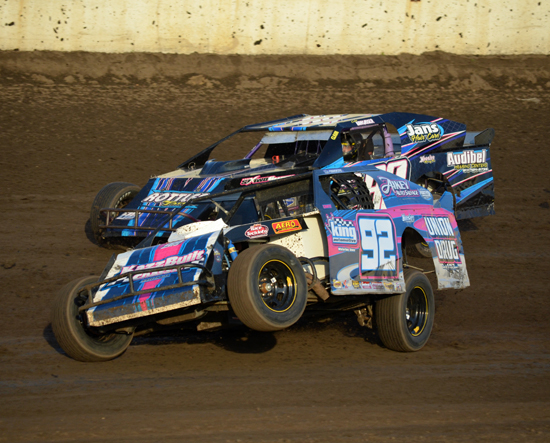 Tyler Droste (92) three-wheels it around Coby Bangasser on his way to winning his USRA B-modified heat at Highway 3 Raceway on Saturday night. - Kyle Ealy Photo


Saturday night took me in a northerly direction to the Butler County Fairgrounds in . As you may know, I’m not a lover of half-mile ovals, but there’s something about this track that appeals to me and for the life of me, I can’t put my finger on it.

In the past few years, the big half-mile has played host to “special only” events such as the USMTS Modifieds and Deery Brother Late Models (the now-defunct World Dirt Racing League had a few races there) and keeping it to six or eight events for the season. I (and I’m sure others) thought this was a pretty good idea; You get some laps turned on the big half-mile once in a while, without committing one’s self to a weekly program and a lot of dinero.

Somebody else thought differently…in February it was announced that Highway 3 Raceway was unveiling a 17- race program, running A-Modifieds, B-Modifieds, Stock Cars and Hobby Stocks, all under USRA Weekly Racing Series sanctioning.

Competition for cars and crowds at race tracks is becoming more and more problematic, and with three other Saturday night programs (Decorah, Independence and Webster City) with in 50 miles of Allison, they'll have their work cut out for them. But the facility is in good hands with new track manager Larry Flaws and the Butler County Fairboard seems to be 100 percent behind the idea and that's a good start.

The season opener, which had been washed out two weeks straight, promised a little extra coin to the winners with a cool $1,000 going to the A-Mod and Stock Car winners and $750 to the B-modified victor.

As with any opening night, Highway 3 had a few glitches as far as getting the program going. Packing the track took a little longer than anticipated but the short delay was well worth it. The racing surface was nice and tacky from top to bottom and the action throughout the night was first-rate.

The car counts weren’t great for the season opener, with only 10 A-modifieds, 19 B-modifieds, 18 Stock Cars and 10 Hobbies signed in for the inaugural race, but the next day as I looked at scorecards from other tracks that ran on Saturday nights, Allison's figures were right on par with other competing programs. But I'll take quality over quantity any night and it appeared that I made the right choice for my Saturday night entertainment.

I was curious to see if some of the regulars from other Saturday night programs would show up at Allison and sure enough, there was a mix of cars from neighboring tracks in attendance tonight. One driver who I was told would be there was young hotshot Tyler Droste from . Droste, who tore up the oval last year, has decided to cast his lot at Allison for his Saturday night entertainment. When I questioned on why Allison over Indy, the teenager didn’t pull any punches, “More money,” he replied quickly. “Allison pays $500 to win and only pays $225.” Nuff said kiddo…

Droste showed that he was quite comfortable on the big half-mile, winning his heat easily and dominating the feature. Different track, same results for the third generation racer. Tonight, with the added purse for the season opener, Droste pocketed $750 for the victory.

The Stock Car feature proved interesting with Jason Minnehan of , off to the races early in the 15-lap contest. Wayne Crimmins of had been running second this whole time and even though he had been within striking distance of Minnehan, it didn’t appear as though he had the horses to catch him. Minnehan was rolling right along running his lines smooth as silk and it looked a huge payday was in his grasp. But with only three laps remaining, Minnehan’s motor when kaput and his chances for a $1,000 was here and gone just like that. Crimmins picked up what Minnehan dropped off and took the home the big check.

The A-modified feature had the most excitement of the evening when Doug Hilson of Blooming Prairie, , was involved in a violent crash on the backstretch. Hilson, who was racing nose to tail with Bill rimmins of Fort Dodge for second place, attempted to slide in front of Crimmins as they both entered turns three and four. It appeared from my vantage point that Hilson's car didn't clear Crimmins' and was clipped from behind. The nose of Hilson's modified dug in and started flipping voliently in mid-air, at least four times, landing on it's top. A few tense moments arose as emergency personnel rushed to the scene to get Hilson’s ride back on its wheels and extricate the driver from his car. As soon as the car was turned over, Hilson climbed out, more frustrated than hurt. 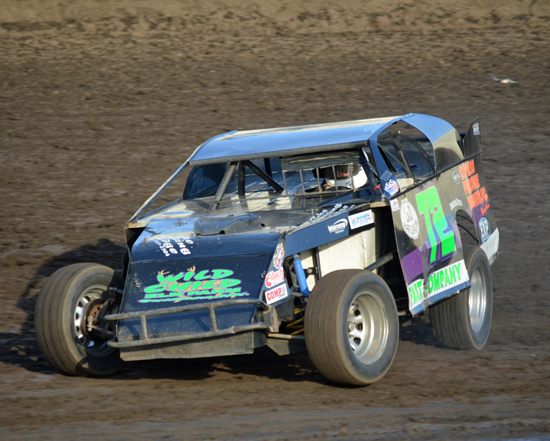 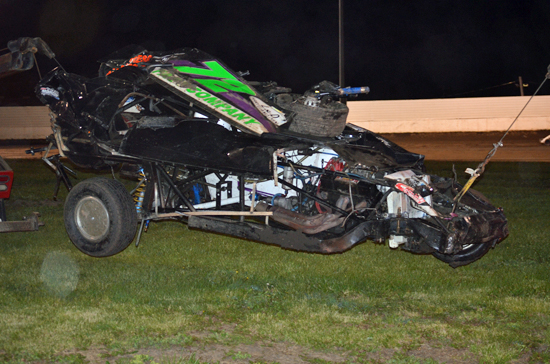 The other “moment” in the race involved Rod Scheuermann of Scranton, Iowa. I had noticed Scheuerman during his heat race, “exhibiting” an unusual, yet aggressive driving style, bobbing and weaving through traffic. He carried that style of racing to the A-main where he got involved in some bumping and jostling with some of his fellow competitors until race officials decided that too much was too much. On a restart, they ordered him to start at the back of the pack. Of course, like any competitive driver, Scheuerman didn’t think he should have to go to rear of the field. Again, officials nicely asked Scheuermann to either go to the rear or leave the track. Scheueremann sat there on the front stretch for a minute, proceeded to do a burnout and then drove around the track with extending the middle finger to every official on the track. Scheuermann was disqualified immediately and went home with empty pockets. Kudos to the officials…Remember guys and gals, those officials on the track are only the messengers.

Tim Murty of , was the class of the A-modified field and made it look easy in picking up the $1,000.

The Hobby Stock feature was much the same as Chris Hovden, Steve Holthaus and Stac Schroeder hooked up in a tremendous battle for the top spot. Schroeder, who started fifth, got a good run on Hovden and Holthaus and just as he was going in for the kill on the identical looking cars, he and Holthaus touched, sending them both spinning. Schroeder was sent to the back while Holthaus was given his spot back. Hovden, with no further competition after that, sailed to the win. After the checkers flew, Schroeder showed his dissatisfaction with Holthaus by getting into a little extracurricular activity in turns one and two while heading to post-race tech.

Just another Saturday night at Highway 3 Raceway…Now I remember why this place appeals to me so much.

There were a few setbacks for the season opener, but it was a good night of racing overall. The track was fantastic all night and despite the limited amount of cars, the racing was exceptional. The fans in attendance seemed to enjoy themselves immensely and hopefully, as word spreads, more drivers in the area will make Allison there Saturday night destination.

A special thanks goes out to track manager Larry Flaws and the Butler County Fairboard for their hospitality during my visit. I’ll make a few return trips there this season.