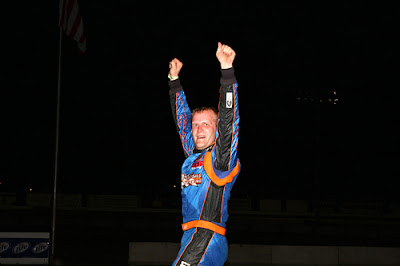 
Cedar Rapids, Iowa (August 12, 2011) – Thirty-nine years ago, a father took his son to the races for the first time to Hawkeye Downs Speedway. The then 8-year-old kid watched some guy named Darrell Dake pass two cars coming out of turns three and four to win the feature that night. The kid was hooked on racing for life.

Later that year, that same father and son went to a race called the Falstaff 100, a stock car race organized by a local beer distributor named Keith Fleck. It was a USAC-sanctioned race and a driver from Zanesville, Ohio, named Butch Hartman would be come its first winner. Despite some setbacks and glitches at the first race, it would become an annual event for the next four decades. 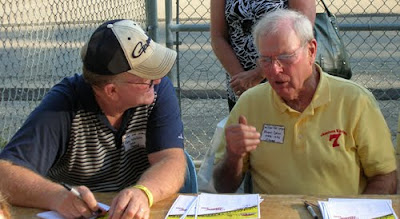 
While it would go thru a few different name changes (Falstaff 100, Falstaff 50, Falstaff Classic, Miller 100, Miller American 100, Miller Genuine Draft 100, and the Miller Lite 150) over the years, the race would quickly become one of the premier late model racing events not only in the Midwest but the country and some of the legendary names in racing would compete in it. Even after the track switched racing surfaces from dirt to asphalt, the event kept going and top notch drivers kept coming. 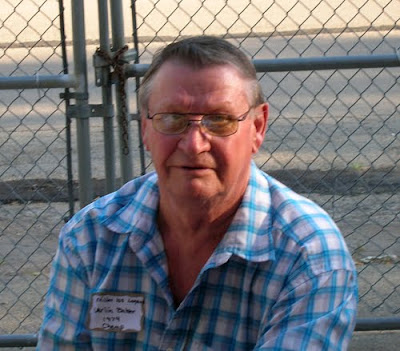 Verlin Eaker, the 1979 Miller 100 champion, was on hand to take part in festivities at the Miller 100. - Kyle Ealy Photo


As I was making the short drive to Hawkeye Downs Speedway yesterday afternoon, I got to thinking about annual racing events here in the state of Iowa and it came to me that the Miller 100 at Hawkeye Downs holds the distinction of being the longest, continuous late model event in this area. This being the 39th year for the race, only the Knoxville Nationals has run for more years continuously.

Out of 39 events, this year’s Miller 100 was number 35 for me that I’ve attended. I didn’t attend the event from 1989 to 1991 because I was still pissed that Hawkeye Downs had changed from dirt to asphalt. In hindsight, I regret not going now because I missed out watching two of the most decorated short track drivers in history winning the event, Larry Phillips and Joe Shear.

I skipped the 2005 event because I was skeptical of this new American Stockcar League, the sanctioning body for the race that year. As it turns out, I remember reading the box scores the next day and they only had 13 or 14 late models show up for the 150-lap event (the ASL went belly up after only one season).

Despite the four that I skipped, the Miller 100 has always been on my “races I need to see” list every year. No matter what, I have to be there…it’s my hometown track.

For example; In 2007, I had four wisdom teeth extracted the morning of the race, but just as they were starting driver introductions on the front straightaway, here I stroll in, bloody gauze in my mouth, cheeks swollen like a chip monk, looking like I had mouthed off to the wrong sailor.

I was so doped up on the car ride home from the dentist that morning I don’t remember telling my mother to stop at the store to pick up some ice cream. Later that day, after I awoke from a 5-hour nap, she handed me a bowl of mint chocolate chip ice cream.

“It’s the ice cream you wanted,” responded my mother.

“What do you mean, ‘the ice cream I wanted’?” I replied. "I don't even like mint chocolate chip."

“I asked if you wanted anything on the way home and you said you wanted ice cream, so I stopped at the grocery store. As I was walking from the car to the store, you rolled down the window and yelled, ‘I WANT MINT CHOCOLATE CHIP MOM!!’ at the top of your lungs. You don’t remember that?”

Apparently I didn’t…that was some good shit they gave me that day.

The memories of the Miller 100’s I've attended over the years I can still see as if it just happened yesterday. Fred Horn coming from the fourth row to win in 1977 race. An unknown driver from West Virginia named Rodney Combs showing up in 1980 and giving the local boys an ass-whooping. My favorite NASCAR driver of all-time Bobby Allison, making an appearance in 1983. Kenny Walton of Viola, Iowa finally winning the big race in 1984 after coming oh-so-close in previous tries. Billy Moyer coming from the back of the pack, not once, but twice in 1989. Dudley Fleck skidding across the finish line on his lid in the 1992 race. Steve Carlson capturing his first of a record seven Miller 100’s in 1996. Two local boys, Justin Diercks and Johnny Spaw dueling for 100 laps before Diercks prevailed in 2003. Trent Snyder holding off a determined Landon Cassill in the 2006 race. Every Miller 100 I’ve attended holds a special memory.

Besides Steve Carlson winning a record seventh Miller 100 in 2010, I also can remember seeing Jonathan Eilen of Hampton, Minn., tagging the turn two wall that night. As it would turn out, he hit the wall so hard that the injuries he sustained put him in a area hospital for a couple of days and put a abrupt halt to his season altogether.

In a twist of fate, the same track that almost cost Eilen his career in 2010, smiled upon him Friday night. Some great strategy and a solid restart, got Eilen to the front at the midway point of the race and he now has his name forever etched in Miller 100 history.

What made his victory so much more rewarding was the way he decided to celebrate. Instead of doing the customary burn-out, smoke show on the front stretch, Eilen kept on rolling past the grandstand, into turn one and came to a complete stop in turn two, the same spot where he met trouble head on last year.

The Hoosier victory dance then ensued…The wall won last year but revenge was Eilen’s this time around. “I was so happy to be able to come back to this track and show that wall who is boss,” he stated afterwards.

It was another Miller 100 memory that I’ll keep with me forever.

Thanks to Dudley Fleck, Mike McGrath, Steve Einhaus, Kari Shear-Carlson and the ASA Midwest Tour for making the 39th annual Miller 100 another special race for yours truly.